HAVE NO FEAR, UFT FIGHTING BACK WITH AN APP

There might be a full campaign on the right to completely destroy unions in this country. Those forces aligned against us may get a huge boost in the next month when the US Supreme Court in the Janus case will most likely decide union dues are optional in the public sector.

However, there is no need to worry ladies and gentlemen.

The UFT is fighting back!

Are we calling out the Mayor for just being an extension of the previous mayor on education?

Well no even though this is really the fifth Bloomberg term in the schools so being anti-teacher is still the culture at the Department of Education.That's ok with the UFT.

Are we going to mobilize for a contract we can really be proud of that restores teacher dignity?

Hell no, contract negotiations are done in secret. No matter how awful the contract is, we will sell it as the greatest victory ever.

Are we fighting to get rid of the teacher evaluation law?

No, we are trying to tweak it so our system in NYC becomes the model for the entire state. Everyone loves what Charlotte Danielson has done for our profession. Let's have more observations.

What are we doing then to fight back?

We launched an APP. Member discounts are right at the top. The UFT will even advertise CTLE hours so teachers can give the union even more money to get needed professional development hours mandated in the Education Transformation Act of 2015 that we did not oppose.

This APP is so cool it is featured on the cover of the New York Teacher. 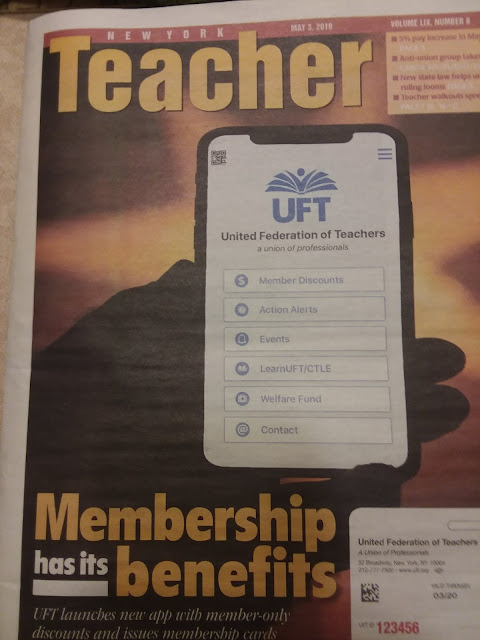 The UFT might not have your back but the union certainly has one wonderful APP. Enjoy it as it is for members only.

The UFT is a joke and the laughs are on us.

Just think we'll hear the good news from the Supreme Court in a month and a half. The joke is on Mulgrew and Weingarten.

There’s a serious problem with the UFT, if this is how they expect the rank and file to keep paying dues. Judging by the marketing and enthusiasm, I believe it does. UFT keep your APP and toilet paper discounts. Mulgrew is like that principal caught crapping on the football field - this APP, his answer to Janus, is his crapping all over us. Mulgrew you better wake the fuck up and come to the understanding we aren’t all blithering idiots that will remain in the UFT no matter how much you crap and allow others to crap on us. If the UFT doesn’t do something that really matters for the rank and file I’m out - and I’m not the only one.

I'm pro union, but not pro UFT. The U F T is just a self-serving sister bureaucracy of the DOE. They care only about their well being and survival. Members are merely thought of as a source of revenue.
Janis is a blessing for NYC teachers. At the very least it will humble this arrogant ass Mulgrew, and at best will uproot this giant weed. This corrupt union,this sham being played on us, needs to end. I hope Janus will slay this beast and a real and honest union take it's place.

Need some evidence? Just take a look at the U F T payroll. See how many of these fat cats are feasting off YOUR dues, raking in $100,000+ annually. Would love to follow them around for a week to see just what they do for that money.
Or how about Mulgrew telling members the city was broke and we had to accept 1%?
Or how about this clown telling members that we need to love Danielson and 4 observations, that it is GOOD for us?
If you've been paying attention to this u f t , you know this list is endless.

I am beyond disgusted with the UFT.

What needs to happen is have the UFT crownies teach for a year. Let Mulgrew etc. experience first hand what it is like to teach now.

They wouldn't survive five minutes in a 2018 classroom in most schools.

6:40: 4 observations? I thought Mulgrew was alright with raising it to 8.
And the UFT is always telling us how great Danielson is because it frees the test scores from determining everything.

I want to see their fat cat principal level salaries cut. And put Mulgrew back into his old school to see how great Danielson is.

Mulgrew wasn’t even a real teacher. He had a virtual wood shop where he played VCR tapes of people making things. The only drilling that went on in his classroom was with the married - to someone else- guidance counselor on top of his desk. Yup, he eventually married her and she now works for the UFT. Mulgrew is no paragon of virtue, role model, teacher or effective union leader.

"Mulgrew is no paragon of virtue, role model, teacher or effective union leader." That should be the motto for this blog.

The APP is a fuckin joke. And the discounts... How much junk would you have to buy to save even a fraction of the annual UFT dues? This is all they could think of? Genious!!!!

Not too many positive reviews here.

Hey Mulgrew, you can keep your crAPP, and I'll keep my dues.

I really think UFT doesn't believe that many teachers will opt out. I think they want to wait and see what happens.
UFT leaders probably are slightly worried since we're getting "member updates" every 10 minutes. At the end of the day, what do an app and all these updates really do for the average NYC teacher terrorized by Danielson drive-bys? Incompetent & insane admins? Lack of real curriculum? Oh, but the UFT will say members aren't being HURT by evaluation. But HELLO we're being STRESSED by it. And isn't it UFT's job to eliminate (or lower) stress of their members?
The word has gotten out - NYC teachers are dealing with Advance (4 obs) and the rest of the state (2 obs)isn't. Teachers may pull dues on that alone. Oh, UFT won't provide a lawyer if you need one? Guess what?? Hundreds if not thousands of teachers have had to hire private attorneys when the UFT refused to step up. Teachers in every school know at least one teacher that was pushed out, fired etc some hiring their own attorneys. Do they think members will just forget? That threat isn't going to prevent teachers from pulling dues.
The truth is - the damage has been done. The UFT will need to truly show they have their members best interest. Right now, I don't see it. UFT needs a militant leader - AL Shanker style.

Thank G-d I can request an optical voucher from my phone now. My life is officially complete.