I expect a full panic within the Democratic Party leadership if Senator Bernie Sanders comes anywhere close to winning the Democratic nomination for president. I didn't think two of my favorite education blogs covering NYC schools would both be discussing the socialist/Bernie issue today but both EdNotes and Chaz have socialism/Bernie posts. Now that Elizabeth Warren has backtracked on Medicare for All, expect Bernie support to grow so the socialism fear mongering is sure to follow.

My politically middle of the road buddy Chaz (centrist does not seem to really fit) has a piece on education falling apart in Venezuela, the socialist country conservatives love to point to when they want to scare Americans about Bernie Sanders being elected President of the United States. Why is Chaz doing a "Venezuela education is collapsing" piece? It's not normally his domain.  It could be because socialism is doing better in the polls here than in the past. It was great to see Norm Scott (Ed Notes) leave a comment on the Chaz Venezuela piece.

I then went over to EdNotes where my left leaning friend Norm Scott has a piece citing a conservative New York Times columnist, Ross Douthat, making a case for Bernie.

From Ross Douthat via Norm:
The state of the Democratic field reflects the weaknesses of the individual candidates, but it also reflects the heterogenous nature of the Democratic coalition, whose electorate has many more demographic divisions than the mostly white and middle-class and aging G.O.P., and therefore occasionally resembles the 19th-century Hapsburg empire in the challenge it poses to aspiring leaders.

I like the Hapsburg analogy. That can be a bit of a warning about our future also as that Austrian Empire didn't end too well but that is a story for another day.

Back to Douthat:
If you are a wavering Democrat concerned about both party unity and ultimate electability, about exciting all the diverse factions of your base while also competing for the disaffected, both the relative breadth of Bernie’s primary coalition and his decent polling among non-voters and Obama-Trump voters are reasons to give him another look.

The conclusion:
He’s still a social liberal, of course, and he isn’t in the culturally conservative/economic populist quadrant where so many unrepresented voters reside. But for the kind of American who is mostly with the Democrats on economics but wary of progressivism’s zest for culture war, Sanders’s socialism might be strangely reassuring — as a signal of what he actually cares about, and what battles he might eschew for the sake of his anti-plutocratic goals. (At the very least he’s no more radical on an issue like abortion than a studied moderate like Mayor Pete.)

This is why, despite technically preferring a moderate like Biden or Amy Klobuchar, I keep coming back to the conservative’s case for Bernie — which rests on the perhaps-wrong but still attractive supposition that he’s the liberal most likely to spend all his time trying to tax the rich and leave cultural conservatives alone.

I would like to say to my conservative, middle of the road and apolitical friends and family that what Bernie is offering is really a return to the working and middle class friendly Franklin D Roosevelt tradition of the Democratic Party.

As for the we are going to become Venezuela crowd, how about comparing us to democratic socialist Norway as an alternative? 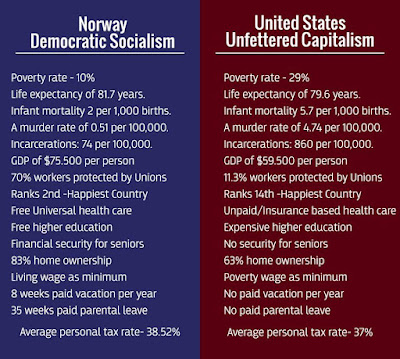 We have been crating this, we have allowed lawlessness to go on in society and schools, so numbers have improved. Same amount of crime, less arrests. Water down laws, less people get arrested. Students don't do work, they graduate anyway. Take money from people who work, give it to people who don't work, you have less poverty. You like doing these things? I don't.

If we used these simple standards, how many would succeed?
You will not be rewarded for bad behavior.
Being told no is part of life, get over it.
You are free to make your choice, your are not free of consequences.
Life is not fair.
You are not the boss.
The world does not revolve around you.
Respect is earned, not given.
The world owes you nothing, work for it.
Tantrums will get you nothing, stop wasting your time.
You put yourself here, you need to fix yourself.
Shut your mouth, open your ears.

Don't dare mention here the murder and misery caused by socialism. If you do cite Ve......a, China et al, expect to be moderated.
See, we wouldn't make the same mistakes. It really will be different this time.
Btw I think teachers should have their pensions redistributed to those with greater needs....

Do we need to teach the difference between democratic socialism and communism? Relax, there will be plenty of freedom and private industry if Sanders were to be elected. Think FDR legacy please, not Mao. The fear mongering is on already and we have not even held a primary.

By the way our pensions are protected by the NYS Constitution which thanks to union efforts cannot be touched because we defeated the constitutional convention in 2017. Unions led that opposition, including the UFT.

There is no way Bernie will be the nominee. Can you imagine if he ever got to the White House - he’d be in the scope of every self appointed patriot. Trump will win spectacularly, unless Bloomberg hits every goal perfectly - if he does we may have him. Then everyone will say Trump wasn’t really that bad.

7:20, I truly hope your prediction is totally wrong. Bloomberg is not going to win over Democratic primary voters. Not happening.

"Bloomberg is not going to win over Democratic primary voters." Remember 2016? Trump wasn't supposed to win the primary/election either. As for Commrade Sanders, I don't trust him with my hard earned money. Sorry, I worked hard for my money and don't want it redistributed to those who don't want to work and remain on the dole.

It is hard to believe we are just about two months from the first caucus and primaries. All of our work. All these donations. All the volunteer shifts. All the social posts, phone calls and door knocks. All the BERN app use. It all comes down to what we do right now. So thank you for chipping in.

@BernieSanders is the most trusted candidate, unafraid to take on corporate greed.

Did you know that in my lifetime, we are 70% more “productive” yet wages have gone up only 7%?

Emails obtained by an advocacy group reveal lobbyists helped draft or extensively revise opinion columns that were sharply critical of major proposed changes to the government's role in health care. The emails show how lobbyists have taken an active role in trying to shape public opinion against an idea that has divided Democrats during the presidential primary.

FDR intered the Japanese Americans!!! Ironically, these socialists will imprison Russian Americans??? Like AOC would say: like omg!!! Thank goodness for the Constitution Leftists want to destroy.

I’m considering resigning. It’s my first year in the DOE and I know everyone says it gets better, but my principal is getting worse as the school year progresses and my coteacher is a miserable person who is not open to any learning other than the way she wants to do things (which involves yelling, slamming books on desks, asking my sped children what is WRONG with them on a daily basis). I don’t think I can do this. What are other jobs I can look into as a sped teacher with 1-6 cert? I’m so conflicted everyday

I think on the positive/negative balance sheet, FDR comes out ahead despite the internment of Japanese Americans which was definitely on the bad side. It was endorsed by the Supreme Court.

One question for every socialist on this thread, but especially the moderator/owner: what percentage of your hard-earned money am i entitled to? (I have many needs and wants.)

3:22: try to get out of the city; look into westchester for example. or try to go to a private school.
p.s. dred scott and plessy were endorsed by the supreme court, so your point is?

My admin has decided that our school will not call subs this year. So, when a teacher is absent, his or her entire class is placed into another class.

Fortunately, most of our classes have low registers. However, on any given day, your class of 18 students can balloon up to 34 students. It makes it very hard to plan because you never know how many students will be inside your classroom. There aren't enough chairs, desks, supplies, etc.

When teachers complain, they're told by admin that the cap is 34 students. If you say that you have more than 34, they will pull out 2 or 3 kids. I remember when I had 34 students every year, so I am very grateful to have a small class this year. It just really challenging to have 2 different classes in one classroom.

When teachers return to school, after calling out sick, some of their colleagues are pissed off with them, instead of at the admin. Which is precisely what the admin wants to happen, I'm sure. Divide and conquer.

We pay union dues for a reason. Having someone who was there to help me and be on my side would be nice.

How many more non english speaking students does the city plan on injecting into the system? How are we going to teach all these kids who do not speak english and in many cases have problems with their native language spanish! The native students seem to be caught in the middle wanting to cater to the illegals but over whelming situations are flooding nyc schools and maybe the charter schools can start to take some of them, here that Eva

Students walk around school, with ear pods in, with music on...Yeah, they are learning subject matter.

For the commenters who seem to despise the students, I have a simple suggestion: resign.

1109, there seem to be many of us...Or maybe we just despise the atrocious behavior.

11 09
You should apply to a charter chain they would just love you and your enthusiasm to teach Mexico about American culture. Plus they make you work on weekends right up your alley, dats all folks

8:05, This should never happen unless there is a real emergency. Admin not wanting to pay for subs or coverages is not an emergency. Please read Article 7N3 of the contract:

The Board and the Union agree that classes of absent elementary school teachers should be covered by employment of per diem substitute teachers as a matter of first priority or by other appropriate coverage by teachers in the school if necessary. The practice of breaking up classes of absent elementary school teachers and assigning the students to other classes in the school is strongly discouraged. The Board and the Union will jointly monitor compliance with this provision.

Email us at iceuft@gmail.com. We will happily publicize this and push the UFT to fix it. I don't know what school you are in.

If you despise atrocious behavior, use Contract Article 9, Save Legislation and Chancellor's Regulations to do something about it rather than put up with it.

Contract is a useless piece of paper if teachers don't use it.