MAYOR’S PEP SHUTS DOWN ANOTHER 22 SCHOOLS

March 11 was another sad evening for students, teachers and parents as Mayor Michael Bloomberg’s Panel for Educational Policy voted to phase out 20 schools and close two more this June at the annual school closing meeting in Brooklyn. This brings the total of schools closed to around 140 in the years of Bloomberg’s reign over our city.

When school was dismissed on Monday, I made my way over to Brooklyn Tech for the PEP.  The UFT and public presence was not as great as it has been in the past as a sense of futility has set in.  President Michael Mulgrew was not even in town; he was in Cincinnati. The upstart MORE caucus was there protesting outside and inside and there was a group from the UFT’s leadership as well as members from the impacted schools that were present.  UFT Secretary Michael Mendel did represent the Union very well.

He gave an impassioned plea to the PEP to end the school closing policy that he knew would fall on deaf ears as the mayor’s majority always approves Department of Ed proposals. He said that after twelve years in power the DOE should be ashamed of themselves for continuing to close schools instead of fixing them.

Secretary Mendel mentioned one specific school that should not have been closed: Jamaica High School!  He then told the panel why Jamaica deserved to remain open.
I didn’t have to wait too long after Mendel spoke to be able to address the panel as there was a resolution raised by the Queens and Manhattan Borough President’s representatives to put a moratorium on school closings and co-locations. This came up fairly early in the evening and public comment was allowed rather early.

The DOE seems to be trying to make it intimidating to even speak as two DOE security people surround the speaker and the speaker is kind of roped in.  I went ahead and told the PEP about how the Educational Impact Statement at Jamaica High School is a fictitious document since students are not able to finish their programs as the DOE promised.  Any student who came to Jamaica for the Engineering, Computer Science, Business or Finance programs was out of luck when the school when the PEP voted to phase us out.  I informed the PEP that they vote and forget us but real lives are impacted.

I related how former PTA President Charm Rhoomes and I wrote to the State Education Commissioner and with the help of Senator Tony Avella, the State Education Department sent Dr. Holder to Jamaica last year and her scathing report backed up what we were saying about how students at Jamaica were being cheated in the phase out process.  I had barely enough time left to talk about how Andrew Jackson High School was one of the initial schools that was phased out back in the nineties and just to prove how unsuccessful the school closing and small schools policy is, the DOE is now phasing out two of the four replacement schools that are in that building.  When will this insane policy end?
It was no surprise that Mendel, Councilman Charles Baron, and others who spoke for the moratorium did not persuade the mayoral appointees on the PEP to support them.  The mayor’s reps and Staten Island all voted against and only the representatives from Manhattan, the Bronx and Queens voted to place the hold on closures and co-locations.  Brooklyn abstained. Chancellor Dennis Walcott even boasted of his power and the uselessness of the PEP when he said this regarding closing schools, “At the end of the day, the decision is mine.”
Also, in an ironic twist, one of the schools protesting was a middle school in Brooklyn that will have the UFT Charter middle-high school co-located in their building. For the record when I was on the UFT Executive Board, I voted no on the UFT starting a charter school. I think I was alone in that vote.

I had the pleasure of riding home after leaving the PEP with NAACP’s Ken Cohen who continues to strongly support closing schools who are attempting the remain open.

You can watch video of the night over at Education Notes.

Read all about it at Gotham where we are quoted.

I was also featured, thanks to some help from MORE presidential candidate Julie Cavanagh, on NY 1's The Call, to speak on school closings. 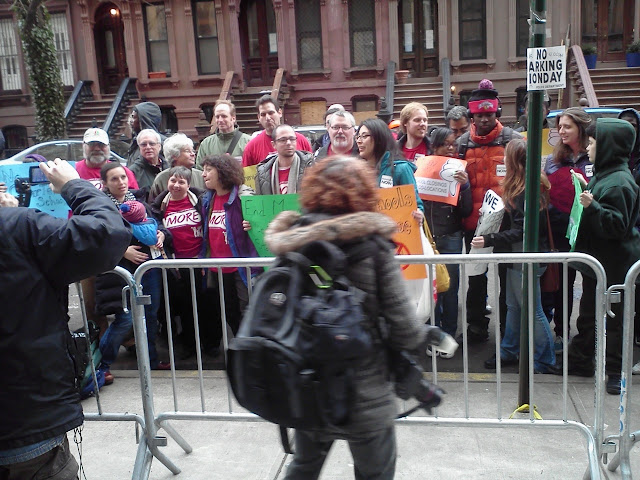 I understand that some of the students from a school facing a colocation started some loud, militant chanting before they left,"They say cutback, we say fightback," (I believe that was it) and that the chanting got picked up by many of the others, if not in the auditorium.

You did a great job on The Call and at the PEP!