A Quick note to Support de Blasio and Liu Tomorrow

Maybe they won't help us at all if they win but if Bill deBlasio and John Liu lose tomorrow's runoff Democratic primary for public advocate and comptroller, then the UFT will be in an even weaker position than we are already in since we have pushed so strongly for these two candidates.

Ever since 2001 when the UFT endorsed three losing Mayoral candidates, the UFT endorsement has been a little tainted. Tomorrow's run-off could turn the tide a little back in our favor.

ICE has not endorsed any candidate in these races; I am writing this post as strictly my own opinion and I also placed it in my Chapter newsletter.
Posted by James Eterno at 9/28/2009 11:50:00 PM 6 comments:

DID RANDI GET IT RIGHT?

" 'It looks like the only strategies they have are charter schools and measurement,' said Randi Weingarten, president of the American Federation of Teachers. 'That's Bush III.' Weingarten, who praises Obama for massive federal aid to help schools through the recession, said her 1.4 million-member union is engaged in 'a constructive but tart dialogue' with the administration about reform."

Our friend Merry Tucker sent this to ICE mail. 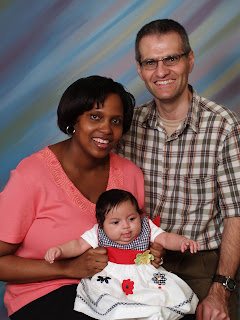 It is no state secret that my wife Camille gave birth to our baby daughter, Kara Teresa Eterno, this past summer on July 17th. People have been asking for a picture so here we are. Having a child puts everything into perspective.

A Tale of Two Spins: Did the UFT Win or Lose the Budget Grievance?

Same grievance with two entirely different interpretations. The first is from the DOE and the second from the UFT Chapter Leader update. We'll leave it to you to decide who's right.


A Tale of Two Spins
From the Principal’s Weekly: Sept 16
Sharing Budget Information with Your UFT Chapter Leader
All schools
An arbitrator recently determined that, under Article 8(C) of the Teachers’ Contract, chapter leaders and other union representatives are not entitled to the full view of a school’s budget on the Galaxy Table of Organization. The arbitrator determined that principals in all schools must provide their chapter leader and chapter committee with a copy of the School Leadership Team view of the Galaxy Table of Organization at the opening of the school year in September and before the end of the school year in June. Principals should continue to consult with their chapter committees regarding use of school allocations and any budget modifications. If you have any questions regarding this issue, contact Kellie Walker.

CONE OF SILENCE COMES TO DA

The blackout on contract negotiations news continues as the UFT leadersip requested at the special Delegate Assembly today that we not talk to the press or post information on the internet about negotiating committee matters. We will respect the wishes of the UFT president but some of the stuff is already out there in public so we feel ok to comment on information already in the public domain.

The press has been reporting for a while now that Chancellor Joel Klein wants to fire the Absent Teacher Reserves after 12 months if they cannot find a position. If we agreed to this, it would effectively mean the end of tenure and seniority rights as closing schools has become rampant across the city. Obviously, Klein is on the attack. How should the UFT respond? Please tell us as we would like to know what our readers think.

Should the UFT also endorse Bill Thompson for Mayor? Tell us what you think.

Also, the Stella D'Oro workers who won their strike and are now having their plant moved to Ohio were at the DA to talk about their protest at Goldman Sachs. Goldman will be financing the union busting move.

That's about it except for a report from new President Michael Mulgrew on how horrible state and city budgets are. Same old stuff there.
Posted by James Eterno at 9/16/2009 10:55:00 PM 20 comments:

Mike and Mikey on the Contract: Mikey Keeps Quiet

New York Times education reporter Jennifer Medina reports today that the mayor views union contract negotiation as "give and take" democracy. We always thought democracy had something to do with voting and representation but I guess in the Mayor's world everything boils down to business.

While not divulging what exactly will be traded the Mayor made it clear he is seeking to buy teachers who are flexible and try new things. Our anointed president had no reported response. Can the UFT be marginalized any further?
Posted by Jeff Kaufman at 9/10/2009 12:10:00 AM 14 comments:

How Should Teachers be Evaluated?

There is a new experiment going on that the UFT is involved with the DOE and the Gates Foundation on how to evaluate teachers (see NY Times piece). Did you get the letter from UFT President Mulgrew and Chancellor Klein asking to be involved in this experiment?

We know where President Mulgrew stands on collaboration. We want your opinion.

Is this experiment a good idea for us to be involved with or are we setting ourselves up for our eventual destruction?
Posted by James Eterno at 9/02/2009 07:52:00 PM 35 comments: