Meredith Kolodner's Daily News piece on the banned student play is must reading. Just the picture and playbill are worth it.
Posted by James Eterno at 12/31/2010 05:48:00 PM 1 comment:

Amidst all of the criticism over the Mayor's mishandling of the blizzard of 2010, a state judge ruled that Commissioner David Steiner acted rationally in granting Cathie Black a waiver so she can become Chancellor.

The Teacher's Side of the Banned Play

Huffington Post has printed Brian Pickett's account of the banned play at Jamaica High School. He is the teacher of the after school drama course that included students from both Queens Collegiate and Jamaica HS.

We at Jamaica High School continue to be at the epicenter of the closing schools controversy which is why I feel compelled to keep writing about it.

Our students along with pupils from Queens Collegiate (one of the new schools in our building) wrote a play about school closings based on the Greek classic Antigone. A day before they were scheduled to perform it the principals of the two schools banned it. The students were very upset.

Thanks to my colleague Marc Epstein and with full approval from the students and their mentors at Queensborough Community College, the script is now on the Washington Post blog.

The play isn't very long. Please take the time to read it and ask yourself if banning this work isn't just another inevitable result of school deform. We can't say anything that might upset the mayor.

The Manhattan representative on the Mayor's rubber stamp body called the Panel for Educational Policy is Patrick Sullivan. He stated at a recent Panel for Educational Policy meeting that he often feels when sitting up on the Panel, whose majority constantly ignores the will of the people, that he is witnessing the end of democracy. The students who wrote and produced this play would certainly have reason to agree.

People have been in touch with the New York Civil Liberties Union. Let's hope the production sees the light of day.

Is Tenure a Strike Issue?

With the recent announcement by the DOE that tenure, as we have known it, will change the question remains, how. In their press announcement the DOE has cited the media created hysteria over tenure vowing to end or at least modify tenure "since it is a job for life."

The modifications, although not specific, contain some very troubling guidelines including a principals' "incentive" to reward those who don't grant tenure by allowing hiring outside of the hiring freeze.

The new guidelines also signal a move to remove tenure entirely or at least make it so difficult that only a few will be granted. Think about it. The law on tenure allows the DOE almost unfettered discretion in its decision making. What is to stop them from just not granting tenure at all and requiring probationers to annually extend their probation until they are eligible to retire?

In order to see if this is legally permissible is necessary to understand a little about the state of current tenure law.

Despite current misconceptions tenure is not "given" by the DOE. The only legal requirement for tenure is actually time; three years for teachers. After a three year period, within license, of being on payroll and the DOE has done nothing to stop the clock, you are automatically granted tenure. In fact you can be theoretically rated unsatisfactory for each of the three years and still get tenure if the DOE doesn't fire you or cause you to extend your probation.

Any other requirement for tenure is for the DOE to implement. The only legal requirement is that tenure not be denied "in bad faith." Does denying tenure to all teachers constitute "bad faith?" Perhaps, but it will probably take a court to determine this issue and a Union willing to bring a case.

If the DOE unilaterally decides to end tenure in this fashion and is successful it will end our Union and professional education in our city. This may be a long range plan for our employer and like tenure, only time will tell.

So, is tenure a strike issue? I am reminded of one of my first arguments with Randi Weingarten in the early days of the Bloomberg administration at a Chapter Leaders' retreat. After making it clear how a strike or job action was almost never justified I asked her whether there was "any" strike issue.

She thought for a moment and said, "Yeah, tenure." 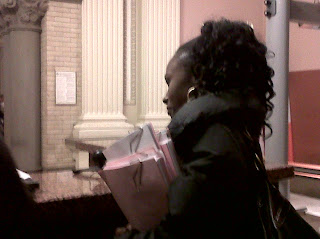 Jamaica HS PTA PRESIDENT CHARM
Rhoomes at Tweed with a stack of petitions
for the Chancellor.


Tweed sent half an army of officials to Jamaica High School today to announce their proposal to phase us out. We are not alone as 25 other schools are now slated for phase out. We must work as a union to stop this madness.

Yesterday, three parents and a student from Jamaica, accompanied by some teachers, went to Tweed to hand in 1670 signed petitions asking the DOE to keep Jamaica open. (Most were hard copies from the Jamaica community but the online petitions that we still encourage all to sign were also handed in.)

The group was met by a DOE employee who looked at the petitions and then put them through a metal detector. Apparently, they think we may have been trying to blow up Tweed. I can't believe how our democracy has degenerated.

Tweed also showed their hand that this so called proposal for phase out is in reality a done deal and they are just going through the motions by talking to us. They actually brought in a personnel person to help teachers look for new jobs. I think that is a bit premature.

LA, Chicago and now DC teachers have voted out their union leaders who have done very little to protect their members. Maybe the day for the NYC teachers to rise up and finally oust Unity Caucus will soon be upon us.
Posted by James Eterno at 12/01/2010 10:53:00 PM 1 comment:

Petition to Save a School

If you will pardon one more post about Jamaica, we have written a letter-petition to the current Chancellor concerning our school. The response for the hard copy has been amazing as in just two days, we have received over 1,000 signatures. Now it is online. Please sign it.

We encourage all of the schools threatened with closure to get petitons together too. We will support your actions and link to them on this blog. Just send us the information.