The DOE plans to announce the closing of the two remaining schools on Rikers Island tomorrow in a meeting called on the last day of school. According to DOE and union sources the two schools, Island Academy and Horizon Academy, which service 16 to 21 year old incarcerated youth on Rikers Island will undergo a restructuring leaving most teachers as ATRs and the future of incarcerated education uncertain.

The Rikers schools are part of the Alternative High School district, District 79, which has gone under restructuring almost every year since Cami Anderson became superintendent in 2006. In past reorganizations the move was done with Union blessing. (See, e.g., http://www.uft.org/member/contracts/teacher/appendix_i/ )There appears to be no union-management agreement for the Rikers schools.

District 79 had been criticized for being too big and too expensive to operate. In one restructuring over 750 teachers became ATRs when it was decided that the GED schools were not cost-effective. Many of those teachers are still ATRs.

When a school reorganizes or restructures teachers are forced to reapply for their jobs or risk being placed as ATRs. Non-tenured teachers also face possible dismissal. While our contract does allow restructuring this cannot be done without consultation and when done must follow the procedures of Article 18 of our contract.

A high school needs freshmen to keep going but the Department of Education has basically starved the closing Queens High Schools of new students. You can read all about it at these links. We are quoted extensively and are still fighting this injustice. Please help us if you can.

ICERS ON THE RADIO TONIGHT

If you are near a radio or computer tonight, please tune in to WPAT, 930 am between 7:00p.m. and 9:00 p.m. as Joan Seedorf and I will be on the Teddy Smith show. It's a music-talk format. We will be talking about education. Please call in if you can.

Just as quietly as it appeared the layoff and retention section of the open market screen has disappeared.
It is unclear why the DOE deleted these two references but we are glad it was done.
We wish it were that easy to take layoffs off of the table.
Posted by Jeff Kaufman at 6/11/2010 01:18:00 PM 10 comments: 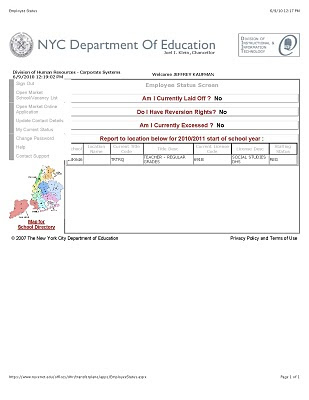 Without warning or explanation the Open Market System has been changed to reflect "Current Status" which indicates whether the DOE employee is laid-off, excessed and current assignment. For those of you who do not have access to the system an example is reproduced above. (Click on the example to enlarge it).
Posted by Jeff Kaufman at 6/09/2010 12:37:00 PM 8 comments:

MAYOR UNILATERALLY DECIDES TO FREEZE OUR WAGES TO STOP LAYOFFS

Contract negotiations between the UFT and the city are at impasse and a state mediator is attempting to bridge differences. In the midst of this process, Mayor Bloomberg on his own decided yesterday that in order to plug part of the Department of Education’s budget gap that he would be imposing a two year wage freeze on teachers. To me this is merely an accounting trick that will have little bearing on actual contract negotiations. With the so called savings, however, Mayor Bloomberg has decided that there will be no need for layoffs of teachers at this time. Other cuts to education will still go into effect unless we can restore funding from Albany and DC. Step and longevity increases will continue; these are not raises.

A close look at the city’s budget the last three years shows that two years ago the city set aside money for UFT raises for 2009 and 2010 of four percent each year since other city unions had already been awarded those same increases. The city did this based on pattern bargaining where one city union settles on a raise with the city and that sets a pattern for other city workers.

The pattern of two years worth of four percent increases was set by DC 37 in 2008 at the height of the financial crisis. Last year the city lowered the projected increase for UFT members in its spending plan to annual raises of two percent and now they are decreasing the projection to zero. Can they get away with this? For now the answer is yes as we have no recourse other than to go to fact finding arbitration which is non binding and did not serve us well in 2005. Sadly, our union is not strong enough to have the leverage to stop the mayor. On the other hand, the city has argued for years that pattern bargaining should prevail as the best way to settle labor contracts so they seem to be completely abandoning their traditional bargaining position. This will play out over the long haul so nothing here is set in stone.

In terms of the publicity campaign, the Department of Education for now has backed off their threat to lay off senior people but they still put out a deceptive statement with their no layoff decree. The DOE stated that since step, longevity and education increases are still in effect, teachers will still get salary increases that will average 3%. Talk about misleading information. I have never heard other city agencies that have experience steps, such as the police, talk about advancing up steps as raises. Also, since the steps and longevity increments for teachers only go to 22 years, anyone who is more senior, like me, is truly frozen. There are thousands of us that fit this category and we are once again being treated with disrespect by our employer.

In the end, we are relieved that there won’t be layoffs but UFT members have not had a real salary increase since May 19, 2008 (the date our last contractual raise went into effect) so we have already had a two year wage freeze. We will keep you posted as more details emerge.
Posted by James Eterno at 6/03/2010 08:27:00 PM 10 comments: