We are quite pleased with the decision of Judge Joan B. Lobis to declare null and void the January 26 Panel for Educational Policy vote to close nineteen schools. We applaud Judge Lobis for her courage in standing up to the Bloom/Klein empire.

The city says it will appeal. According to everything we have read so far, the DOE is going to try to dance around the decision. Why don't they support the schools instead and make all of them excellent places to learn?

Here is a link to Gotham where you can read the decision yourself.

Julie Woodward wrote a succinct report on the main points of the Delegate Assembly. It is copied below.

Then, everyone needs to head over to Education Notes to read ICE-TJC elementary school VP candidate Yelena Siwinski's commentary on UFT inaction today compared to the days of wine and roses that the UFT will be celebrating this evening at the 50th anniversary bash.

Also, please keep working through Friday to get out those votes. You will be surprised by how many members still have not voted. Word of mouth is our best way of lifting our vote total.

Today's big message at the DA (and at other UFT meetings, not to mention the Chapter Leaders Weekly) was to get everyone to call or fax state assemblymen and senators regarding the budget cuts. They say we're "faced with staggering cuts to education coming from Albany totaling $1.4 billion to the state, more than $600 million to the city, and an average of more than $11,000 per classroom."


Mulgrew announced today, as Weingarten used to, that the union's "core belief and motivation" has always been fighting for children. That's not exactly the position I'm looking for the union to take with my dues money. It's like saying the most important job of the of the police union is to fight for the man on the street, or the teamsters for the companies they service. To me it's a bit disingenuous for a union to adopt a child advocacy stance to further its own agenda, but if you're comfortable pushing that line up at Albany – as Mulgrew is encouraging you to do and which you might want to do if you have kids going to NYC schools – go with it.


An interesting thing Mulgrew told us at the D.A. today was that Albany is telling him they're not doing any more funding for NYC because Klein will waste it all.


He also said that the State Ed Dept is "broke." They eliminated positions by attrition and the offices are empty. Now they want to do away with Regents Exams this year because there's no money for them. Mulgrew advocated to make sure they do process them on the grounds that "you have to have standards." I'm not sure the reasoning behind that. The Regents system has changed a lot since my kids were of college age. At that time they were told that many colleges outside of NYS didn't care if you took a Regents or not. Maybe someone who knows more about the current Regents exams can tell me whether these tests are totally necessary these days.
Posted by James Eterno at 3/25/2010 06:18:00 PM 1 comment:

UNITY CHANGES THEIR NY TEACHER AD; WE MUST WORK HARDER THAN EVER TO GET OUT THE VOTE

If we really want to do well in the UFT election, NOW is the time to really start to work.

ICE wrote a brand new leaflet at our last meeting which was in part a response to the Unity campaign ad that was in the March 4 NY Teacher. The campaign to distribute our current leaflet has been fairly successful. We are reaching schools we have never been to before. We have received very positive feedback.

Meanwhile, Unity has taken the unprecedented step of changing their ad from one NY Teacher edition to the next.

We were not given the option to change our ad but Unity has a brand new one in the March 18 edition. They will do anything to maximize their vote including changing the rules in the middle of the election. We must now do what we can to get our vote out.

Word of mouth publicity can't be beat. We need to talk to everyone we know and tell them to vote for the ICE-TJC slate. Many UFT ballots are probably underneath the census in the mail pile at people's homes. Members are busy people; they may need some encouragement to vote, particularly since the ballot looks so complicated. Tell everyone you know who is a UFT member to vote ICE-TJC and ask them to call all of their friends to do the same. It's up to all of us now to make this work.

Inform them that all they have to do vote for all ICE-TJC candidates is put an X in the box for ICE-TJC, make no other marks, put the ballot in the secret ballot envelope and then place that envelope in the return envelope. Then mail it.


Quote from our leaflet if someone needs persuading. You might be surprised by how many people haven't voted yet if you walk around your school or make some phone calls and ask.

ENDORSEMENTS AND A SHOUT OUT FROM GERMANY

There is great stuff on the web concerning ICE-TJC in the election and also Jamaica High School being one of the top 500 education protest stories worldwide for 2009.

Enjoy some endorsements and links.

More evidence that Jamaica HS hasn't given up as teachers (Julia Shlakman and I) and students (Rachael Ali and Mehjabeen Hassan) along with others are interviewed by Free Speech Radio. The interviews took place within the last two weeks.
Posted by James Eterno at 3/19/2010 12:06:00 AM No comments:

After seeing the Unity Caucus election ad, I emailed Michael Mulgrew. I said to him in part:

"I understand elections are a tough business and you can attack me all you want, but to take a quote from the NY Times where I was criticizing the DOE and use it to say that I appeared defeated and then ask the members if they want a president who had given up is quite a stretch.

In reality, as you know from the email I sent you the weekend after the PEP school closing vote, I asked to be part of the lawsuit opposing the closings and then I said, 'We want to be involved in any ongoing struggle to keep our schools open.' This hardly sounds like giving up."

I also told Mr. Mulgrew that at the February High School Committee Meeting, I called for a three point plan to stop school closings in addition to the court case that I have strongly supported.

I said we should picket the work places of the Mayor's PEP appointees.
We should also lobby Albany to take the Chancellor's school closing authority away and maybe his waiver from educational requirements too. Why wait until the law sunsets to change it? It isn't working now.
We should also have a tougher advertising campaign.

You can read the entire proposal on this blog if you wish.
3 POINT PLAN TO STOP SCHOOL CLOSINGS

I also informed Mulgrew about how after the PEP vote on Janaury 27, people from Jamaica, including me, were still talking to the press and we had speakers at the February Panel for Educational Policy meeting and the City Council hearings on school closings in early March. It hardly sounds like we quit in any way at Jamaica.

I made other points on the election and Jamaica High School and I concluded by saying that a great way to increase turnout in the UFT election would be to have a presidential candidate forum between us.

I have not heard back from the president and the email was sent to him on March 9. 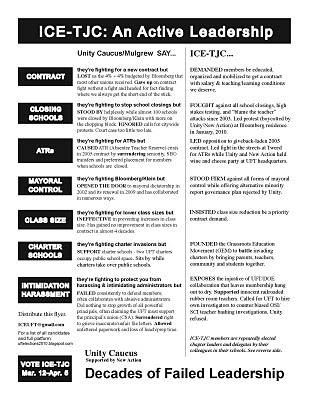 I’m running with ICE/TJC for the UFT High School Executive Board, and I’m asking for your vote. Given events of the last few years, like the disastrous 2005 contract, the union’s support of mayoral control, the erosion of seniority rights, the advent of perpetual lunch duty and hall patrol, and the inability to grieve letters in a file simply for their being incorrect, I’ve determined there’s a need for a new voice in the UFT.

Unity is an invitation-only caucus that’s controlled the UFT since its inception. When people join, they agree not to vary from Unity positions in public. Whatever Unity tells them to say, they say. Essentially, it’s a loyalty oath. In recent times, many of Unity’s decisions, like those listed above, have not benefitted working teachers.

There is another caucus called New Action. It supports the top of the Unity ticket, pretty much guaranteeing more of the same. It was once an opposition party, but in 2003 Randi Weingarten bought them off with patronage jobs and a few seats on the UFT Executive Board. With your help ICE/ TJC can claim those seats and bring real independent voices and thoughts to our union leadership.
If elected, I will be your voice not only here, but also on the UFT. I will not support measures that hurt working teachers, or any UFT members. I will vigorously oppose measures that appease Bloomberg and Klein with vague promises of benefits to come. Such measures have not served us well.

I will fight for a fair contract, for professional treatment, the retention of tenure, and the concept that a raise means more pay for doing the same job—not for extra time, extra duties, and fewer benefits and privileges.
Please check ICE/TJC on your ballot. Vote for a change in the UFT.
After 50 years, it’s time.