The Chicago Teachers Union (CTU) believes in the power of the strike and they will be voting on whether to authorize one in the next few days. Chicago teachers are voting on a strike even though they are only legally allowed in Illinois to strike over salary and Chicago Public Schools' management is offering decent salary increases.

This is from NBC via Norm Scott:

CHICAGO — If Chicago teachers accept the pay raise they’ve been offered by the city’s mayor and school board — a 16 percent bump over five years — they could soon be some of the highest paid big-city teachers in the nation.

But here, in a city where many schools lack resources to help children in poverty cope with trauma and other challenges, and where a strong history of union activism has already triggered two teacher strikes this decade alone, union leaders say a pay raise is not enough.

What? Could you even contemplate UFT President Michael Mulgrew saying a pay raise is not enough in NYC?

Back to the NBC article:
As educators in the nation’s third-largest school district prepare for another strike, some even call the city’s raise proposal a distraction.

“It’s a very strategic thing they’re doing,” said Katie Osgood, a special education teacher and a rank-and-file member of the union’s contract negotiating team. “They want to use that to decrease the public support that we have, to say: ‘C’mon greedy teachers. Take the deal.’”

While Osgood acknowledged that the pay offer is “not the worst,” she said teachers are focused on more than just paychecks.

The teachers’ demands — including smaller class sizes and the hiring of additional school nurses, librarians and social workers — are similar to those that have echoed across the country in the last two years amid a wave of teacher activism not seen in the U.S. in decades.

As stated above, llinois law only allows teacher strikes over salary. They can bargain over other issues like class size but not strike. I find it very interesting the Chicago Public Schools are offering 16% over 5 years. Certainly, they want to make this look like a battle against selfish teachers. The union is asking for 15% over 3 years. How they go around the law to threaten a strike over educational issues should be fascinating. 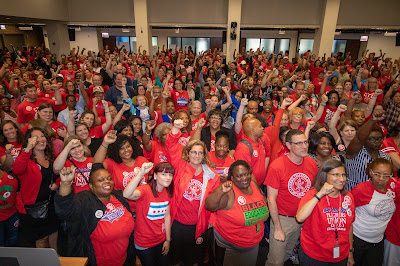 For more information on the CTU situation, I went to Substance, the Chicago equivalent of EdNotes.  Here is a part of George Milkowski's report on the September House of Delegates meeting:
(Financial Secretary) Maria (Moreno) said the Board is trying to split us by offering higher raises while ignoring everything regarding working conditions. A strong “yes” vote on a strike is necessary to get the Board to move in negotiations. She also reminded the delegates that according to Illinois State law, those who do not vote will be counted as a “No’ vote.

They will be taking that strike vote in the schools in the next few days after the Delegates voted unanimously for a vote to authorize a strike.

To show the differences between the UFT and CTU, just read more of the Substance report on the Delegate meeting:


President’s Report – Jesse (Sharkey) was brief. He said an overwhelming vote to strike is our best opportunity to get a good contract. He stressed that we need a written guarantee in the contract to hire clinicians, nurses, and so on. We cannot rely on verbal promises.

He is basically saying we are fighting for more than just money and his report was brief. Think about that NYC UFT Delegates as you sit through the next Michael Mulgrew hour long report at our Delegate Assembly.

I know some reader is going to say that Chicago teachers make less money than NYC teachers. Let's do a comparison. Chicago teachers start out at $52,000 and max out just short of $100,000 a year. If they accept management's offer, they will end up close to starting at $60,000 by the end of the contract and they will max out in the $115,000 range. Toward the end of our contract in May of 2021, teachers in NYC  will start  at $61,070 and max out at $128,657 a year. NYC teachers will be ahead of Chicago even if the CTU's demand for a 15% raise over three years is met. However, when we compare the cost of living in the two cities, teachers are doing pretty well out in the windy city even before they obtain raises in their next contract.

Cost of living 42.9% lower in Chicago compared to NYC; that is a major difference. NYC teachers certainly don't make 42.9% more money than our Chicago colleagues.

To be fair there is one clause in our contract that is light years better in NYC compared to Chicago. Absent Teacher Reserves in Chicago get a few months after schools are closed or downsized to hook on in another school and if they cannot, they are terminated. I hope the CTU does something to address this. NYC teachers can remain ATRS forever. If I was in Chicago, it would have been very difficult to keep my job after my school closed. I condemn the UFT for giving up seniority and SBO transfers in 2005 but credit them for not allowing the DOE to finish the job and terminate teachers after schools are closed or programs downsized.

That said, what is the advantage to taking an early contract, as we did in NYC in 2018, and not at least threatening some kind of militancy? NYC teachers won very little as is shown in our current contract with its less than stellar raises and working conditions that continue to deteriorate or at best stagnate. Note that the CTU was also not afraid to say that 23 CTU members opted out of paying dues this year. Not bad for a union with tens of thousands of members.

Oh I almost forgot about this: What presidential candidate will be joining the Chicago teachers on Tuesday at a giant labor rally?

Of course it's Bernie Sanders.

We will see how this all plays out in Chicago.


James, this article is in the NY Post...This happens in every school.
I was always stoned, drunk and skipping class — so they let me graduate early: Maspeth alum

I'm an atr, every school I go to teachers say...I pass everybody all the time, work doesn't matter, dont want to be questioned by principal, bothered by guidance, or cursed and threatened by parents.

I'm a first year teacher and I must say I'm having the worst experience of my life to the point where I'm considering quitting. I teach a K-2 self contained and most of my kids are second graders. My kids are extremely low. They don't know their letters and sounds, as well as numbers. admin keeps telling me I cannot teach them on a kindergarten level and that I have to use the second grade curriculum to teach them. I don't have a mentor, they just threw me in a classroom and I'm now getting instructions on what to have in my classroom as of Monday. My head's been pounding for the past 4 hours and I feel like I'm going crazy.

Please contact us on email at ICEUFT@gmail.com. We will try to help.

My Principal is a trip... When she was at MS 391 as a Math teacher she slept around and this isn't just gossip. She got pregnant by someone but told the Dean that the baby was his and had him pay child support for many many years (over 10). He gave his "daughter" a DNA test to track her roots; one of those test kits you can purchase to see your background. Well not one thing said she was Latino in background. And he was wondering why she was treating him differently. Well he found out that the mother (my principal) knew he wasnt the father and only told him he was because he made more money than the teacher she actually got pregnant by. She told the kid a long time and because he wasnt her real father she started treating him differently and the DNA test was the lightbulb why the change. Now I say all this because this is a person in charge of our children's education entrusted to have a moral compass and holds many careers in her hands. But the DOE isnt going to do anything. In fact they will probably promote her one day to superintendent. SMH And people wonder why I have such distain for this system.

I think the NYC teachers will always go for the money.

We are updating 12/23 whenever we hear anything.

Agreed! 12/23 leads to more and more give problems and give backs. 1.25% is HUGE! How about waiting 11 years to be made whole. Instead of fighting for us our MuGEW says " back pay is not a God given right" We need to stop settling for the crap that our Union who says is good AND START THINKING FOR OURSELVES.

Like I said before, our fearless leader made the comment, "everyone else works on the 23rd", get ready to lose all holidays and breaks, it's coming for sure, summertime babysitting and daycare ain't cheap, but we are, hell we are free! I envision July fourth to around august 15th as our one and only break, luckily I'll be retired by then, but those of you just starting who don't care about the 23rd? You will when you are taking in the poop soot over everything else that comes after and you will be thinking it all started with the 23rd of December 2019. Just like losing 1.25 percent on the TDA started the ball rolling downhill, look at all the givebacks since then! You know they thought "if they are dumb enough to exchange thousands in interest for what works out to, over a 30 year career, be 60 extra days they will take anything! BEND OVER TEACHERS IT"S ON IT"S WAY , you won't feel a thing trust me.....until you are bleeding from your butt.

Reply to MS 391-- those people working at 391 all worked under the late Pedro Santana. They were responsible for stabbing Luisa Fuentes in the back to get her job at 279. Once they were found out they went on to 391 and continued their damage. Students have been harmed and injured by these people. They make others feel inferior and look down on others. Some how they are all still working except Santana (rest in peace). They all droved Fuentes to an earlier grave.

Even the sweatshops know as Success Academy are going to be closed on December 23rd. Mulgrew will now forever be known as Mulscrooge from now on. And what does he care? The dues money keeps rolling in. Shit, he will probably be out on vacation by then. He does not have to worry about the DOE launching an investigation on him for calling out that day.

Excellent point. If we call our wonderful UFT office on Dec 23rd will they actually answer the phone or will we hold for 20 minutes and then speak to the concierge? If we are WORKING on Dec 23rd WE SHOULD CALL OUR UNION AND MAKE SURE THEY ARE WORKING TOO!!!!!!!!! After all as Mugew said most people work on Dec 23rd.

If we are working they should be too. Call the union on Dec 23! Here us MIKe Mugew!!!

No dues from me, and proven correct every day.