Back in January the DA passed a resolution calling for the reversal of the mayor's plan to cut down, by 20%, the number of permits issued by the DOE for staff parking near schools. Randi was quoted as saying how disrespectful this move was and the negative impact it would have on attracting and retaining teachers. This is true especially for schools that are far from public transportation.

Today, we received the news that Randi's "cooperative bargaining philosophy" has yielded another giveback; the loss of over 80% of the DOE issued permits into a system which is centrally monitored. Randi justifies the tentative agreement (they have agreed to suspend the grievance) by her "relief" that the number of parking spots has not decreased.

The UFT web site cleverly substituted the parking permit rights portion of "Know Your Rights" with the letter from Ed Skyler explaining the loss of our "rights."

Way to stick up for your members! 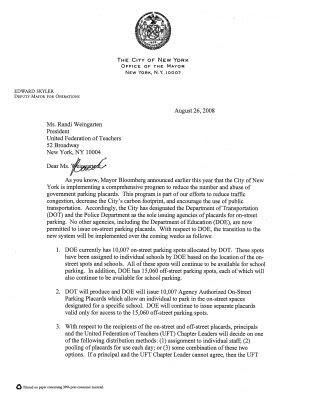 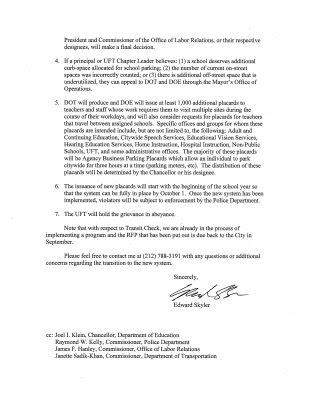 Weingarten can go f*ck herself. She pulls another Neville Chamberlain and tells us that it is a victory that we are once f*cked up the @ss.

As usual when Randi negotiates, teachers lose. So what else is new?

I don't see where teachers abused their parking permits. It was first come first spot around my school and if you parked illegally, even with the permit, you were ticketed. We have a staff of 55 in my school with 16 parking spots for DOE employees in front of the school. Our four administrators will take up their spots and that leaves 12. I agree with the first two posters. Randi doesn't fight for teachers. Randi doesn't stand up for teachers. Randi, you've done enough. Have you no sense of decency, at long last? Have you left no sense of decency?"

25,000 spots come when you add up the on street and off street spots. They are only going to give permits for 11,000 on street spots I think. This is another crushing blow.

The Union has issued an email to take pride in this giveback. Doesn't that sound familiar...it's the best we could do. Don't you love the loss of seniority; the extra time; the loss of a step of our grievance procedure and many more?

Randi's response and the city's intentionally misses the point. If everyone had permits like the way it always used to be whoever on a given day got to school early enough got the spots. Now it will be up to the administration to hand these out to whoever they choose as a "payoff". There is no end to the revisionism of Randi Weingarten and total captitulation to the mayor.

Thanks for posting the Skyler letter. The UFT sent it to out to members several hours after you posted it. Once again your active research and involvement in the educational affairs of our city helps make our union more transparent. It is a mistake to insist we speak with one voice and listen only to what we need to be told- which the UNITY party insists upon. Once again, thank you for telling more of the story than the UFT leadership would like us to know. Keep up the good work.

It seems to me that parking permits will be divvied up according to the
pecking order in the school. Teachers in the click will get them. The
principals spies will get them. Unity collaborators will get them. The
hard working staff who earn their pay every day will have to park down
the street and have to move their cars for alternate side. Im sure
BloomKlein will issue a regulation prohibiting teachers from leaving
the school in-order to move their car for alternate side. This stupid
rule will not cut down on green house gasses or encourage teachers to
use mass transit. Except for teachers in certain parts of Manhattan all
this dumb regulation will do is force teachers to park down the street
from their schools and increase parking fines. This is nothing more
that a punishment against teachers. I propose that Chancellor Klein
should be made to give up his park anywhere parking permit as an
example to everyone.

Does anyone know if Randi has a "park anywhere" DOT parking permit for
her limousine. If she does, I think she should turn it in as an example
to all of teachers who are loosing their permits.

Randi's chauffeur waits for her. No need to worry about a parking permit for her. She'll donate hers to you possibly.

Randi travels first class all the time. Also she has a chauffer and secretary who arranges all of her itinerary. She lives quite well and is more accustomed to the lawyer life style than teacher life style. All this talk about her union family is as real as her teaching experience. She and her helpers really dropped the ball with the parking fiasco. You can see by the internet and media response regarding the issue. Something to remember when her hand picked candidate runs for office, that is after she bows out with much time left on her term to insure her pick keeps her in power. Does the caucus that has retirees vote favor term limits?Hey, if Bloomberg&Quinn change the rules why can't the uft?

Hey ICEICLES,
Are you complaining again about our leader? Why do teachers need to park? Take a cab. We got you guys $100 grand. Spend a few bucks to get to work in style. Personally, I'm going to walk to my union job. No one is watching anyway.

Unity Hack-someone is watching as you fail to show up for your bogus class that DR's are suppose to teach(and have been doing so for soooolong), in fact many DR's are by contract teaching 1 class, but someone is watching and your double dipping days will come home to roost. Check it out at Maiden Lane. Maybe you will have to become taxi-cab Hacks

Most recent anon why not park it/

Nice to see some lively debate on this post.

Yes, Randi has a way of screwing us, then gives more power to the principal and chapter chair to screw those not in agreement with them.

Don't believe that this is real power for the chapter leader. Let's say princpal decides who gets permits and CL disagrees. Goes to union to complain. Then what? "File a grievance or whatever," CL will be told. In the meantime, CL starts getting U observations. GOes to union. "File a grievance," is the answer. CL is sent to rubber room. "At least you're getting paid and we'll get you a NYSUT lawyer."

Norm,
I meant those CLs that have a "relationship that benefits him/her" with the principal.

"I don't see where teachers abused their parking permits."

Yet another way for Bloomberg to take my lunch money!!

Right Schoolgal. But the power doesn't really come from this agreement. With CL who suck up it goes way beyond trivial things like parking. Principals will give CL who sell out whatever they want. But you are right in that these people now have a perk to hand out for loyal Unityites.

It looks like traffic agents aren't doing their job.

Does the CC automatically get one??

Any moron can park illegally and leave whatever permit they have on their dashboard. Does this mean they are trying to get over using that permit? Maybe, but they are just ignorant, as are the traffic agents that fail to ticket them. Once again, a few idiots give the rest of us a bad name. The real issue is that we teachers are constantly and blatantly disrespected - case in point: the "education mayor" that takes a butter knife to other agencies while wielding a chainsaw in our direction every time he has to slash his budget...honestly...