I arrived at this party a little late today but I still feel compelled to jump on the blog bandwagon to defend the indomitable, inspirational and courageous leader of the Port Jefferson Station Teachers Association and Stronger Together Caucus, Beth Dimino.  Dimino was the subject of a completely unjustified attack by statewide Unity Caucus, the political party that controls the United Federation of Teachers, New York State United Teachers and pretty much the American Federation of Teachers too.

Ms. Dimino's track record as an advocate is fairly well known.  She has been a vocal and visible proponent of the opt-out movement.  She is a conscientious objector, refusing to administer New York State tests.  This video of her lambasting former NYSED Commissioner John King has made her well known in public education circles.  She has spoken all over the state as an advocate for teachers, students, parents and communities.  I am sure Long Island Opt-Out founder Jeannette Deutermann or her friends at NYSAPE would vouch for Ms. Dimino as somebody who works tirelessly for teachers, students, and public education in general.  If you don't believe me you are welcome to ask them.

Let's now contrast Ms. Dimino's record with that of the Unity Caucus.  Unity Caucus, for nearly the entire existence of NYSUT, has benefited from being the only party in a one party-system.  The caucus has always chosen the presidents and each of the other officers.  When they decided you were out, then you were out, as they have always been able to use the 800 UFT-Unity delegates as a voting block to elect who ever they have wanted to or to enact any changes within NYSUT that have decided to.  You may be wondering why 800 UFT-Unity delegates always have to vote the same way?  Well that would be because the 800 Unity-UFT delegates have signed an oath pledging to vote as they are told to.

Rob Pearl is a Principal in Dimino's district who was formerly a PJSTA VP.  Here is what he said about Beth on the NYC Educator blog in the quote section:

There is no person alive that breathes solidarity more than my closest friend Beth Dimino! An attack on Dimino means they (Unity Caucus) fear her! I fully support and defend Beth Dimino! NYSUT and Mulgrew are afraid of truth!

Norm Scott chimed in over at Education Notes:

So imagine if ST (Stronger Together-Statewide opposition to Unity Caucus) threatens to capture NYSUT or win enough statewide delegates - especially from the other big cities - to challenge NYC Unity control over NYSUT - and then allies with the other national caucuses to create a threat to Randi in the AFT.

Then there is this from Buffalo's Sean Crowley commenting at Ed Notes:

Couldn't be any happier.  Unity and Co. and their fake union stooge movement lashing out with this errant punch at a real unionist like Beth and a real Caucus like ST can only boomerang on them.  And from what I'm reading the Unity slugs are catching it square in the teeth. 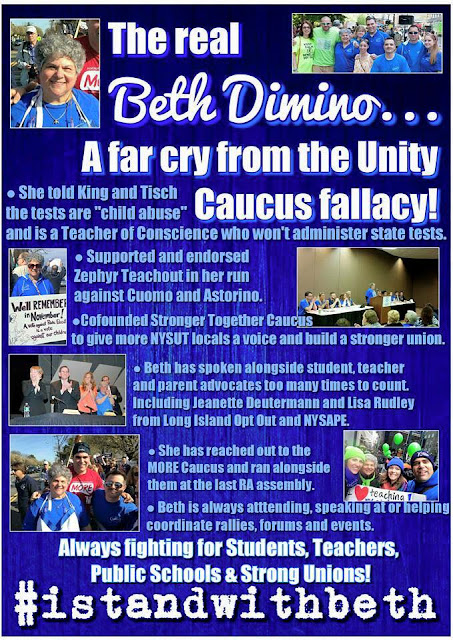 I am not at all surprised by the quality people who are coming forward to defend Beth.  I first met Beth in early 2014 and subsequently worked diligently to convince both ICE and the Movement of Rank and File Educators (MORE) to support Stronger Together both in the 2014 NYSUT election and afterwards in large part because of her involvement.

When Beth asked me to be an observer of the UFT voting room at the NYSUT election, I said I would do it even though I knew it would be about as pleasant as root canal without an anesthetic.  It lived down to expectations as the UFT leadership kicked me out of the room so they could vote without anybody watching in violation of the election rules. I will not soon forget UFT's Ellie Engler screaming out loud for me to leave while Leroy Barr stopped the voting process because I was watching them.  I had to go to NYSUT officials to get back in the room.

Beth persuaded me to file a lengthy formal protest on the NYSUT election and while we did not get the election overturned, the UFT clearly broke the rules and recommendations were made to improve the process in the future.  Beth also invited me to a Stronger Together meeting and I was not disappointed. They are a committed group of sensational trade unionists. I gladly joined and convinced many of my ICE colleagues to do the same.  I urge readers of this blog to spend $10 to join ST.

She has a vision for what the public schools and a powerful teachers' union should be like and she goes about achieving her aims in a way that gets you on board even when she doesn't have a patronage mill of jobs at her disposal.  Beth is the union leader that Unity fears because she is that good at what she does. 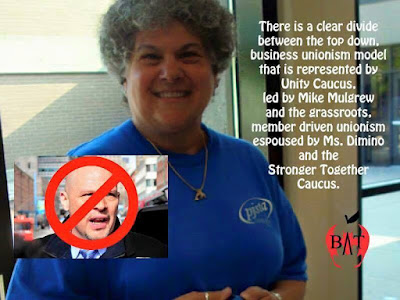 Let me just reiterate what has been said: I'm proud to be a member of Stronger Together and proud to be a friend of Beth Dimino. Ms. Dimino is all about doing what is right for students and teachers. I'd walk, run ,march and stand with Ms. Dimino anywhere she asked me to go in the battle against the destruction of public education.