I hope everyone had a great time on their well earned day off yesterday. NYC teachers and parents won the day off by pressuring the UFT to fight instead of accepting a school calendar that originally had school scheduled for December 23 for the first time ever when Christmas Eve fell on a Tuesday.

We were happy to publicize the historically awful calendar the UFT was consulted on and apparently agreed to. Our original post on the issue received over 10,400 hits. One of those hits came from NY 1 education reporter Jillian Jorgensen who featured my family in her story on school being open on December 23. This helped to push parent and teacher pressure on the State Education Department and the New York City Department of Education.  UFT got on board for sure at that point. In September, the calendar was finally revised. My family was able to travel last Saturday as opposed to having to wait until today.

I was a little conflicted about doing the story with NY 1 because of their labor record but life does involve compromises. The International Brotherhood of Electrical Workers Local 3 strike against NY1's parent company Charter-Spectrum has surpassed 1,000 days. The workers held a rally at City Hall yesterday and two of them were featured in this Queens Chronicle piece which we have copied in full below. 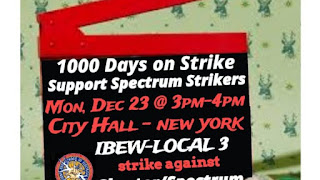 Strikers suffer another holiday season
Dec. 22 marks 1,000 days of their strike against Spectrum

“I used to love the holidays. Now I become the Grinch, I really do,” Tatianna Cabezas said from her mother’s living room couch with her therapy dog, Scooby, in her lap. “At this point I don’t go anywhere. I don’t want to celebrate anything.”

Cabezas, along with 1,800 fellow Charter Communication strikers, is entering her third holiday season without the security of a job. Rather than celebrating the holidays, the strikers note a solemn anniversary — Dec. 22, the first night of Chanukah, marks 1,000 days on strike.

“We’re fighting, and we continue to fight,” said Cabezas, who is a striking captain. “I hope I’m not fighting a pointless battle. I do hope it does boil down to our favor and we get what’s owed to us.”

The strike began on March 28, 2017. The strikers, members of the International Brotherhood of Electrical Workers 3 union, refused to return to work after Charter Communications, also known as Spectrum, allegedly cut pension and healthcare obligations. Charter said the union wasn’t taking a great deal that included raises for most members, though IBEW Local 3 claimed most of the proposed raises reflected the state minimum wage hike.

Cabezas had worked as an installer and troubleshooter for Spectrum while living in Flushing, but has since moved back into her parents’ tiny Bronx apartment.

“I lost my apartment ... I had to give up my car ... I was at one point living out of my car because I was too proud to come back to my parents’ house and admit my failures,” Cabezas said.

Cabezas said her decision to join the strike and “stand up for what’s right” has cost her more than material items — her ex-wife used the strike as motivation to divorce Cabezas, taking their two children with her.

“I don’t get to see my kids because of my taking the decision of not going to work and being on strike and standing up for what’s right,” said Cabezas.

Despite striking against Spectrum, Cabezas and her fellow strikers are still employees of the company. The union has helped its members find work since the strike began in 2017, but cannot guarantee the same wages they had previously been earning. Many strikers are forced to accept entry-level jobs despite their expertise — Cabezas said she makes less than half of what she had been making at Spectrum.

Cabezas is in the process of claiming bankruptcy, a decision she hopes will ultimately aid her financial struggles, but is currently costing her extra expenses.

The holiday season is a painful reminder of the strike’s consequences for Cabezas, which has prompted her to ignore the season altogether.

“I just don’t go to family events,” she said. “There’s nothing more embarrassing then showing up to places when you can’t afford to give gifts to anyone.

“I actually did try to go last year with my parents and I saw everyone give out gifts, and I’m there, and everyone’s hugging their children and I didn’t get to hug my children. Everyone’s giving out the gifts and I didn’t get to buy gifts. I’m just taking up space inside a tradition of the family.”

Cabezas suffers from insomnia, anxiety and depression as a result of the strike. She spent six months in Ecuador with family in attempts to relax and forget her financial troubles, but they were waiting for her upon her return.

“I don’t get the support from [my family] anymore,” Cabezas said. “They tell me to go back and I’m just tired of people telling me to give up. I’m very prideful.”

Spectrum announced on Dec. 11 that it was donating $5,000 to the Coalition for the Homeless as part of the Spectrum Employee Community Grants program. The funds will be used to provide services to 200 women to receive a “thorough and practical understanding of the job market and workplace.”

“You put so many people outside of their homes, yet you’re trying to make yourself look good to the public,” said Cabezas on the telecom’s ironic donation. “Give the people their jobs back.”

Troy Walcott of College Point worked for Spectrum for 20 years before joining the strike, and considers himself one of the lucky ones because he doesn’t have a family and kids suffering from the repercussions of the job action.

“My life was more affected because everything I built in the past that was geared toward preparing for the future was lost,” said Walcott. “Most of the things I had plans for, my retirement account ... I had to devolve and dip into my savings just to maintain ... My future got taken away.”

Walcott was a survey technician, but now drives for Uber and is a leader of the strike. Walcott founded the New York City Communications Campaign to “Unplug Spectrum.” The cable system worker cooperative is made up of former Spectrum strikers advocating for cable to become a municipal service. It would remove Spectrum and hire the strikers in its place, “the workers who built the city for 40 years.”

When asked whether they have sympathy for their striking employees, a Spectrum spokesperson said, “Spectrum’s diverse and skilled technicians have been delivering great service to more than 1 million New York City customers. We are committed to providing our 11,000 New York employees with highly competitive wages, excellent health-care and retirement benefits and training and career growth opportunities.”

The strikers plan to hold a rally at City Hall for their Unplug Spectrum plan the day after their solemn 1,000 days on strike mark.

As of yesterday, 1,800 IBEW members from Charter Spectrum, a politically connected quasi-monopoly, have been on strike for 1,000 days.

@QueensChronicle highlights the struggle of one striking worker who has lost her home, her car and her marriage. https://t.co/g61aEJLYs1 https://t.co/taN0jP9Y7Y

I think Amazon is still opening up in NYC.

Having an enjoyable week. Happy I am in a union.

Amazon is looking into Charter Schools/Sweatshops. Lots of $$$$ to be made. Teachers need not apply.