I saw this response to a question that Mayor Bill de Blasio gave on the Brian Lehrer show back on February 12. 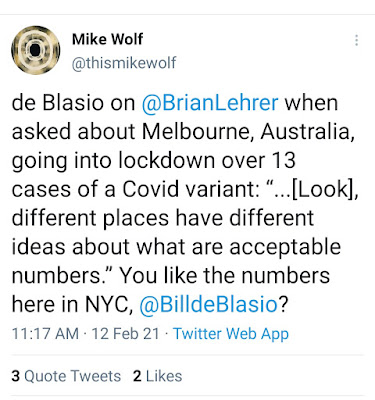 Our friend Reality Based Educator sums up the mayor's thinking quite well: 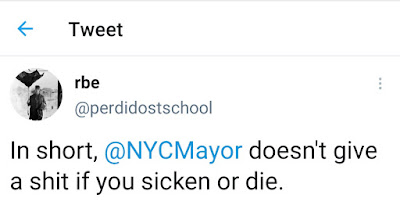 Is the end of the pandemic near or is the fourth wave coming? The NY Times uncharacteristically played it down the middle this evening. They interviewed 21 scientists. They report that case numbers are going down so states are opening up but they admit that is not the whole story:
Buoyed by the shrinking rates over all, however, governors are lifting restrictions across the United States and are under enormous pressure to reopen completely. Should that occur, B.1.1.7 and the other variants are likely to explode.
“Everybody is tired, and everybody wants things to open up again,” Dr. Tuite said. “Bending to political pressure right now, when things are really headed in the right direction, is going to end up costing us in the long term.”
Looking ahead to late March or April, the majority of scientists interviewed by The Times predicted a fourth wave of infections. But they stressed that it is not an inevitable surge, if government officials and individuals maintain precautions for a few more weeks.
A minority of experts were more sanguine, saying they expected powerful vaccines and an expanding rollout to stop the virus. And a few took the middle road.
“We’re at that crossroads, where it could go well or it could go badly,” said Dr. Anthony Fauci, director of the National Institute of Allergy and Infectious Diseases.
The vaccines have proved to be more effective than anyone could have hoped, so far preventing serious illness and death in nearly all recipients. At present, about 1.4 million Americans are vaccinated each day. More than 45 million Americans have received at least one dose.
A team of researchers at Fred Hutchinson Cancer Research Center in Seattle tried to calculate the number of vaccinations required per day to avoid a fourth wave. In a model completed before the variants surfaced, the scientists estimated that vaccinating just one million Americans a day would limit the magnitude of the fourth wave.
“But the new variants completely changed that,” said Dr. Joshua T. Schiffer, an infectious disease specialist who led the study. “It’s just very challenging scientifically — the ground is shifting very, very quickly.”
Shouldn't we error on the side of preventing serious illness and more death by shutting down and not accepting de Blasio's unacceptable COVID-19 numbers?

I’m over it. Can I just use my passport again?

De Blasio's rush to re-open schools will adversely impact the Black and Latino communities
in his misguided attempt to help small businesses and corporations.

Just like De Blasio failed to close schools last March, he is re-opening them too early.
This could lead to a fourth wave of the pandemic and unnecessary illnesses and deaths in minority communities.

I'd rather err on the side of freedom and let the people make their own decisions.

Even David, who if I recall correctly from the reporting on his battle with the DOE is an avowed socialist, is against this government imposed doom.

If you want to lock yourself in a bunker like a survivalist have at it just don't tell the rest of us we can't go out and enjoy the warmer weather, take our kids to the Tom and Jerry movie today or enjoy a meal (and a beverage) someone else cooked afterward.

Agree with TJL. Those who sacrifice liberty for safety deserve neither. Scientists in the a World Health Org say lockdowns killing poor people. Or was Trump right and we should ignore the WHO?

Racism can only be pushed by the class in power. It is intrinsically tied to power. We have a system built and supported by a legacy of white supremacy. There is no reverse racism, not to be confused with personal prejudices.
As for farmland, rural farmland is 98% white owned. The problem with the bill is not what it is doing, it is that it should be doing more. But politicians will hide behind their misuse of identity politics (they get the concept completely wrong as they never account for class, to start) to make it look like they are doing more, when they are doing less.
The discrimination is overall one against poor and working people. Not this anti white garbage that white people feel when they see another group getting something and they don't. It is unfair, but it is because the system has always been unfair to the poor. People of color deal with that plus the added prejudices of their racial identities. Life in capitalist US.

TJL. you seem to equate freedom with people doing whatever they want. we do know that can only go so far. at some point, one person's decision can be detrimental to another person's survival. we are in this together. freedom, as a concept for society, is more than everyone doing what they want. hence, laws. this idea of a bunkered life couldve came and went (as in China, which you may hate to know worked) if we did the right thing immediately. we dragged the problem out here, creating even more problems.
For the record, Socialist states are doing quite well against spread and illness and death in comparison. But here, we gotta see Tom and Jerry. If it hurts our brothers and sisters, so be it. Err on the side of caring for one another, and not just one's own personal wants, that many dont even have the "freedom" to enjoy due to our undemocratic, unequal system. Nothing is free when you are forced to gain it through personal exploitation.

1:26, Are you aware that the 44th president was black? The current VP is black-South Asian. Have you heard of Oprah or Robert Johnson? Black billioare class is growing. They must all be white supremists too.

Capitalism as it's practiced in the US is a real problem but don't say Obama didn't have the power to be a racist even if it was against his own kind.

Definition of racist from Webster:

"Prejudiced against or antagonistic toward a person or people on the basis of their membership in a particular racial or ethnic group, typically one that is a minority or marginalized."

That marginalized group in NYC schools is often white males.

Yes, freedom is not the same as anarchy. Neither I nor anyone else is breaking into someone's bunker to breathe on them.

On the other hand, freedom is not collectivism. In fact collectivism is antithetical to freedom. We don't ban swimming pools to save drowning victims even though they're far more dangerous for children than COVID. We don't ban motor vehicles to save accident victims even though they're more deadly than COVID for anyone under 70. We didn't have government fit the populace with chastity belts in the 80's when HIV/AIDS emerged.

We do fight a stupid and pointless war on drugs. Decades later we've lost more life-years to overdoses this past year than COVID. War on drugs, war on poverty, war on COVID, not to mention the interventionist foreign wars. All government-run failures.

And by the way, I do admit that Socialist Sweden has done great. No crippling lockdowns, only country with a positive GDP in the Spring, and less death than almost half the G7 (US, UK, Italy).

"The number of new infections in Sweden has shot up for two weeks running, its per capita rate now leading Western Europe again."

2:52 some of us just want no part of your takes a village communal thinking. I propose TJL 2024. He makes a lot of sense.

I will take New Zealand's 5 million population and 26 COVID deaths any day over Sweden.

Both are democracies and as pointed out above, Sweden is leading Western Europe in infections right about now.


It helps not to have assholes in charge of government. Jacinda Ardern is a real leader. Analysis of NZ's success on COVID-19 is occurring.

This is from a piece in the Guardian:


Another recurring remark was that Ardern “functioned like a human being” – seen as a particularly stark contrast to other global leaders, says Addison. It was in a 1pm briefing that Ardern referred to the “team of five million” – and watching her, study participants told Addison, they felt part of it.


Do you feel like that with Cuomo, Trump or de Blasio?

New Zealand has community spread again. Let's if they keep it under control. They are telling everyone who did as little as go through the drive through of a KFC where a worker tested positive to get tested.

Who cares about cases? Why is this the sole metric?

The Swedes aren't telling people they can't work, can't shop, and aren't telling people who they can see, what they must wear, etc. Hopefully for them they hold the line because their PM is actually starting to give in to the Coronaphobia. The past year you see pictures out of Stockholm and Malmo and there are people out, no masks, working, shopping, socializing, living their lives. They have an actual functioning society. Except for Florida and to an extent South Dakota, we don't have that here.

We have over 500,000 deaths from COVID-19 in the USA. If that doesn't sadden you and concern you, I don't know what to say. This wealthy country proved unable to meet this once in a century challenge. I would say selfishness played a role in our failure.

I am reading about the KFC in Auckland where someone tested positive for Covid-19. Government is asking everyone who went through the drive-through to come in for testing.

One community case and Auckland is shut down for a week. Nobody is protesting. Kiwis love their freedom too.