I arrived at the New York State United Teachers Representative Assembly after school. Beth Dimino fom Port Jefferson Station obtained a guest pass for me. We will try to report anything of any significance. Saturday is when the election for President takes place.

I (not ICE, MORE or NAC) support Mike Lillis and the Stronger Together Caucus over Michael Mulgrew's Unity Caucus. Unity has annointed former UFT District Rep from the Bronx Andy Pallotta to take over as President. 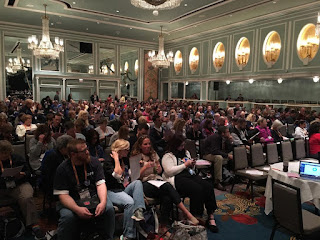 Stronger Together meeting at RA was very well attended this afternoon.

Went to dinner with Brian St Pierre, Jia Lee, Bianca Tanis and two others. Came back and visitors are buried on the second floor to watch on video.

Amendments failed at committee.  They were brought to the floor. Decision was to approve committee recomendation or oppose it and send amendments for a vote where they would need 2/3 to pass.

Nate Hathaway spoke for the first amendment to cut number of NYSUT officers from 5-4. Locals use field services. The speaker against the amendment said officers should not have to do more with less.

Then there was a vote. The amendment failed but had plenty of support.

The second amendment was on democracy. Mike Lillis spoke in opposition to committee recomendation and for the amendment.The amendment was to allow people to vote for NYSUT officers at their regional office instead of only being able to vote in NYC at RA. Lillis said it would further democracy to allow people to vote in their region instead of traveling to NYC. Said people had to travel through a blizzard to get to RA today to vote.

Someone from UUP came on and said 90% represented. (Lillis said it was 30%.) Woman said RA for more than voting for officers.

Someone from New Rochelle asked about 90% being there. What is source? Answer from Evelyn DE Jesus from UFT was 88% of members are represented. Someone asked for the percentage of locals represented?

Brian St Pierre asked if this amendment would preclude people from attending RA. Ruled out of order. Evelyn came back and said 47% of locals were represented.

Karen Magee asked for vote in favor and against. Against sounded much louder.

She called for a standing count that took some time.

Over 900 against amendment, over 700 in favor.  Amendment close to having a majority.

Third amendment to try to get more democracy. Not sure what it was exactly. It got close but failed.

Amendment 4 on Board of Directors elections to get rid of at large directors.

Again the vote was close but the Unity side won so no change.

Andy Pallotta spoke next. Nothing much there to report on.

Then it was Martin Messner, the Secretary Treasurer. Not much there to report on either except he stated that NYSUT has run a surplus three years in a row and built up reserves to pre-great recession levels. He added that pension fund is in better shape too but budget picture could soon worsen.