CITY WILL BE LATE PAYING RETIREE HALF LUMP SUM

I hope everyone read the city-DOE's defense in the recent arbitration agreement. The city claimed that because the payment was due on October 1 and they didn't pay yet as of October 9 so that date is meaningless. They didn't say it but they implied that they can pay whenever it is convenient as we never received a dime on October 1 (the payment due date) since 2015. They are always late and the UFT lets them get away with it.

But don't worry, we have the very angry Michael Mulgrew on our side. He agreed to a deal so we have unambiguous language to get the lump sum payment (well, at least half of the full amount the city owes us) by the end of October. The agreement says, "Board/City to make a Lump Sum payment equal to 50% of the payment which would otherwise have been due (approximately $450 million), by no later than October 31, 2020." Pretty clear, straightforward language, right? Wrong for per session and retirees.

Mulgrew told the Executive Board the per session 1/2 retro payment will have to wait.

As for retirees, we will be waiting a little longer too.

This came my way this evening: 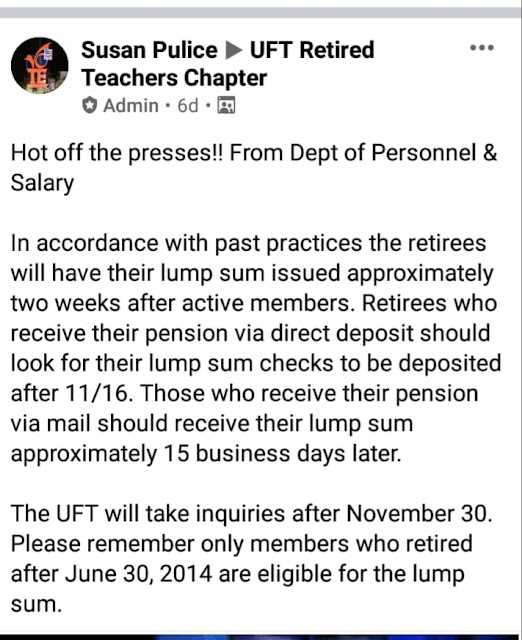 We have ironclad language stating we must get half of the money owed to us by no later than October 31. Instead, we will be waiting until after November 16.

Okay in the age of COVID-19, this isn't that big a loss. But still, the UFT does not even have enough pull or the desire to compel the City DOE to live up to a rather simple date of October 31 that they agreed to. It was easy for the DOE to withhold the funds. It should be just as simple to deposit them. Try paying a parking ticket late and watch the penalties get added on. DOE does whatever they want and UFT just goes along.

I had a feeling they were going to do this or worse to retirees. Retirees should be very concerned with NYC’s economy and a pushover as UFT President. Instead they’re giving him their cab fares for COPE and working like slaves as volunteers to ensure more folks like deBlasio are elected and reelected. Don’t worry Mike, I’ll have Boca Harry blasting your name like a foul profanity down in Boca Raton tomorrow morning.

I had a feeling they were going to do this or worse to retirees. Retirees should be very concerned with NYC’s economy and a pushover as UFT President. Instead they’re giving him their cab fares for COPE and working like slaves as volunteers to ensure more folks like deBlasio are elected and reelected. Don’t worry Mike, I’ll have Boca Harry blasting your name like a foul profanity down in Boca Raton tomorrow morning.

Keep paying dues jackasses. Keep proving how stupid you are. What will it take? Who filed a PERB complaint?

Seriously now, what good is a PERB complaint going to do? All the UFT has to do is show they are not acting in bad faith and that will be dismissed quickly.

This could be a wake up call for retirees!

We need to remind them about this when we have UFT elections!

The first lump sum was delivered to us 15 days late. I grieved it in the union sat with their hands folded silent downtown in front of the DOE. "We only support things that we feel strongly about." That was the day I lost my faith in the UFT. They've done nothing to change my opinion since. I wasted my time trying to advocate for my fellow union members. The union didn't even put on an act that they cared.

Do we even have a date to expect per session retro?

The first, that is the first chance they get. They will pay when they are good and ready.

I agree the Perb complaint will go as far as that class action suit by parents to open the schools fully, nowhere.

Our district CL said that per session retro will also be split between two payments and the first one will be paid out on November 2nd.

FDNY firefighters retire with $150,000 pensions and their union dues don't even come close to the exorbitant UFT dues. Remember this in June when you can opt out.

Do you know for a fact that a PERB Complaint will not go anywhere? Have you even tried it once
against the UFT? I doubt it. You have a defeatist attitude.

Maybe, just maybe, it will embarrass the UFT a bit or at least put them on their guard.
And maybe , the UFT/DOE agreement will be nullified in a lawsuit based on the PERB complaints. It will move out of the realm of a conspiracy theory to a factual case law of union malpractice by Mulgrew.

Now , if thousands of teachers actually stopped resting on their laurels and simply completed the PERB complaint online, then the UFT would be frozen shitless.
Obviously, not one teacher has stood up and put together a decertification process for the

You choose to do nothing other than complain and no one will listen. You can do something relatively easy from you computers: A PERB complaint.

I think that most teachers are more lazy than many of the students we teach because you
are not willing to fight corruption even at the most practical level.

PERB is a waste of time and energy. The UFT only has to show they are not working in bad faith. Do you have any idea how ridiculously easy a standard that is for them to meet? What remedy do you think PERB provides? Use those thousands of people to decertify the UFT.

Not will to die yet said...

Has anyone received attendance generated by google classroom tracks student and staff time in live instruction? I asked my CL and she had no idea if admin get them too.

Not will to die yet,

Of course admin gets the reports of who logged in etc.

They are made to screw teachers over.

Your CL is clueless.

My advice: even if zero kids log in, just keep teaching or at least remain online.

I feel for anyone working for dwarka during this pandemic.

Any horror stories about her?

Rumor is her former lover aka Bowne hs principal howie Kwait has a child w a former student. Again, if is a rumor. I don’t know the validity of it.

Why does nobody investigate Brooklyn Institute for liberal arts? Untenured cl. Principal intimidates staff into passing everyone.

Tell Sue Edelman. She will keep you confidential.

Thank you for posting this info. about retirees and the retro pay. I've been scouring the UFT WEBSITE and the internet. We are the forsaken...

Not will to die yet said...

That’s exactly what I do . I log my time and keep it moving.

Do we have a union that represents its members?

What do you think?

As of this morning, in pay portal, the oct 30 check is not in the system.

I hope mulgrew is in contact w the doe about if we are getting it.

Here’s my question: what happens if the city says we aren’t giving you retro after getting taken to court?

That's because Mulhrew and the city worked out a deal on the details of this one and Scheinman simply signed off on what Mikey and Bill's lawyers worked out. We already probed this.