I was really only watching one primary election closely last evening. State Senator Robert Jackson, one of the best supporters public schools in New York has ever had going back to the  nineties when he was involved in the Campaign for Fiscal Equity lawsuit, handily won  his Democratic primary.  Jackson was supposed to be in trouble because redistricting put him in a Manhattan-Bronx district. 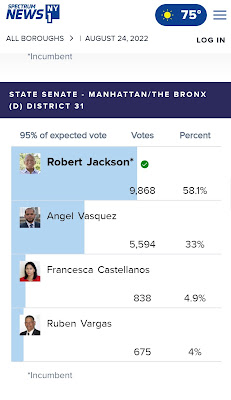 The main challenger had worked for the UFT as one of Michael Mulgrew's many underlings but the Union did endorse Jackson.

I think this election shows that if you come through for people, identity politics will only go so far. 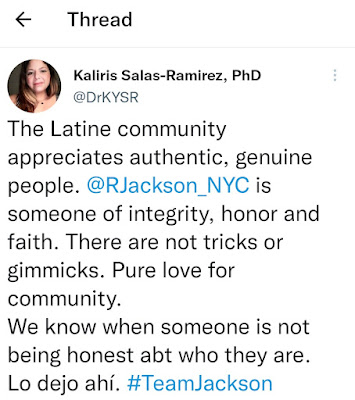 Other results were a mixed bag yesterday with some conservacrats and some progressives winning.

As if this means anything to us...

35% of 4th graders in this country can read at grade level. Embarrassment.

6:25 is right and that makes people in denial mad.

Yay we had dems who are socialists excited to win. Jackson who compared climate change to September 11 attacks seems normal to me. Just like people were excited for ADAMS AND HOCHUL who was not even elected she took over for the corrupt dem Cuomo who killed thousands with nursing home scandal.

Jackson is a decent guy. There is no bigger defender of public education around.

Anyone who compares climate change to 9/11 is not a “decent guy.” He’s a delusional fanatic.

I'm glad he is a defender of public education and supports measures to mitigate the climate crisis. I wish him well.
That being said, I don't think that specific display is indicative of a person's decency, but rather it demonstrated terrible judgement and gross insensitivity to equate an increasing danger with mass murder.

11:13 just stop it. Just like many politicians before him he made a stupid mistake by posing with someone else's artwork. Do you really think he took the time to find out about the banner before he posed with it. Republicans make every excuse with their politicians posing with card-carrying white supremacist but let a Democrat make a judgment in error and they'll feign a complete meltdown.

"I did not note the details of the artwork and would never support anything that denigrates the memory of all who were impacted by 9/11. The artwork depicted is wrong and I fully reject it."

"Indeed the only time I saw the banner in its entirety was on the minority leader's social media. There are two truths here: climate justice is not a political agenda and 9/11 can never be used for political points"

Excellent. Thank you for sharing his response.

1:19. There’s no fair play. It’s a propaganda war now. Jackson is evil. The mural photo proves it. It took Jackson weeks to apologize…. After backlash.

3:01 The mural proves nothing. Get over it. How about you focus instead on Trump being caught with classified materials. That's a bigger story.

8:56 nobody with a working brain believes that. They'll put a spin on it, but they don't believe it.

Yeah, 7:16 THIS TIME the walls are really closing in. Lol. Nothing will come of this either. Time to “get over it.”Jackson denigrated everyone who died on 9/11 and didn’t apologize until forced to. How about a compromise. Both Trump and Jackson are pieces of shit.

Jackson just won his primary challenge by a count of 58-23 against a well funded opponent. The people who know him best, his constituents, voted for his reelection. He added new voters in the Bronx where he is a first time candidate. I am glad he will be representing us in the senate for at least two more years.

8:46 you laught and act as if Trump evaded paying for his crimes without the support of Republicans in Congress, and BARR who provided cover for him as United States Attorney General. Jackson denigrated everyone? You sound desperate. Is that the worst thing Jackson's done? Pose for a picture with someone holding a banner that showed an analogy on the seriousness of climate change to 9/11? Oh no! Seriously?? LMAO. No, no compromise, Trump is in a class by himself as far as being a piece of shit, and a criminal.

This story is about Robert Jackson, not Trump. I apologize for letting Trump in here for comparison at all but once Trump enters, it is MAGA and then Biden kids. No way, this was about Jackson's victory.

Anyone who compares climate change to 9/11 is not a “decent guy.” He’s a delusional fanatic.

More people have died due to climate change and those who willfully ignore the issue and support more oil and gas like Republicans are guilty of murder.

8:11 whatever But he didn't compare 9/11 to climate change that's just a lie. But I do agree with the second sentence.