There is plenty of encouraging news in the fight to preserve choices of premium free healthcare for City workers and retirees but the fight is not nearly over.

An appeals court ruled 5-0 that the City cannot charge premiums for GHI Senior Care because the cost of this Medicare supplemental plan does not exceed the HIP-HMO rate. City Administrative Code 12-126 guarantees free healthcare up to that rate for City workers and retirees. Here are excerpts from the decision of the appellate court upholding the original lower court decision that were in a Chief article:

“The court correctly determined that Administrative Code § 12-126 (b) (1) requires respondents to pay the entire cost, up to the statutory cap, of any health insurance plan a retiree selects. ”

Any plan a retiree selects means retirees have a choice of health plans as I read this.

"[n]othing in the statutory text or history supports respondents’ interpretation that the provision is satisfied so long as they pay for the costs of one of the health insurance plans offered to retirees, which they have determined to be the Medicare Advantage Plus Plan."

Michael Mulgrew and other city union labor leaders are now trying to double-down on going around the courts by having their rank and file call City Council Members to get the  City Council to vote to change 12-126 so the City can offer a cut rate privatized Medicare Advantage plan (Mulgrewcare) and then make everyone who doesn't want the cut-rate plan have to pay up for something better. This change would likely not just affect retirees but active workers would also probably have to settle for a cut-rate premium-free plan or pay to keep what they have now.

A number of unions see through the Mulgrewcare scam and are urging members to call and tell the City Council not to change 12-126. These enlightened unions want to preserve the guarantees that are a part of city law. These unions come from across the political spectrum.

This came our way from the Retired Lieutenants Association: 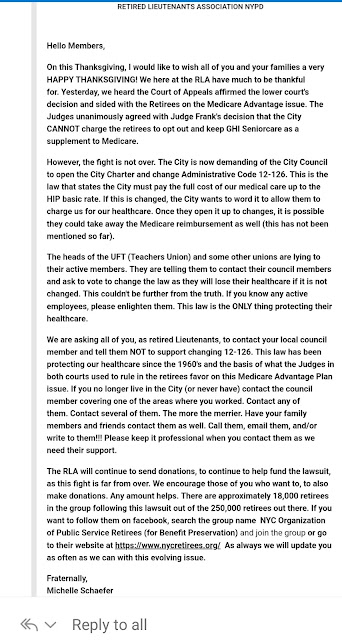 Below is part of an email from the President of the Professional Staff Congress, James Davis, who also opposes changing the Code:

"As you know, the PSC was among the few MLC unions that voted against the proposed Administrative Code change, and we continue to oppose it. PSC members have sent nearly 5,000 letters to City Council representatives - send yours today if you have not done so already."

Call your Council Member. Tell them not to change 12-126.

Full disclosure, I am a proud PSC member as well as being a member of the UFT and my brother is a member of the NYPD Captain's Endowment Association who also oppose changing 12-126. We differ on a number of issues but as City retirees, my brother and I agree on preserving 12-126.

Great, just great. Now we have all the cops in NYC hating teachers because of Mulgrew. That asshat needs a vote of no confidence.

Every other unions retired know the truth, trust me, no one hates teachers. Mulgrew is full of misdirection and untrustworthy commentary. He just doesn't want to pay back because he led the raid of the Health Stabilization Fund for raises and thought it was easy to blindly lead the retired and active and well over the cliff. 250000 retirees aren't going to sit back and accept that because the facts are on our side.

Its all about the moola for mulgrew and other union heads. Only when he and randi are gone, may we have honest and reliable union reps/leaders that actually care enough to do something to benefit the members, other than attempting to add to their bottom line. But we must vote for the right people and NOT who we're told or suggested we vote for. Moola Mulgrew must go!

Didn't the retirees overwhelmingly support Mulgrew and vote for him in this last election?

There’s a much deeper problem here than just health insurance.The problem is that there is a massive amount of teachers who no longer trust the UFT. When given the choice between insuring/securing teachers or insuring/securing the institution of the UFT itself, the UFT has consistently chosen the latter. This was evident when the UFT chose not to warn or stop teachers from going in for useless trainings on 3/16 -3/18/20. The UFT chose to stay silent for the sole reason of not losing the automatic dues check off. Now there is some currency for the UFT, to help itself again, by selling a bill of goods to the retirees in order to facilitate whatever it is they want - and it certainly isn’t to give retirees a better health option.
This isn’t just the case with the Uft. This is a case with almost every institution in this country. People no longer trust that these once unquestionable institutions have our best interests in mind. What will happen is either these institutions will be dismantled via a revolt or there will be a complete authoritarian clampdown. We’re beginning to see this in everything, all over the world, from the small entrenched bureaucracies, to China, to Iran, to political parties, and to the military industrial complex that is now ready to take over complete control.

Bronx ATR: I beg to differ. It seems the rank and file either trusts the UFT or are apathetic to its existence. The proof is that the majority of teachers in the last election did not vote at all. The ones who did, more voted for Mulgrew than UFC. This entire healthcare debacle rests on his shoulders since it seems that he is the mouthpiece of the MLC who are pushing to screw retirees and in service members. My fortune teller is telling me that the City Council will not try and amend the city code to healthcare and the end result will be arbitration. This push to arbitration will be once again be done by Mulgrew and his MLC cronies. The end result, however bad it may be, will be his baby. All those teachers who either voted for him or did not vote at all are going to be wondering what the hell went wrong while those who voted against him will be saying, "I told you so!".

John Q.: There are some components to this that you may not have contemplated. Many that choose not to vote may believe that the outcome is rigged. I certainly do and almost anyone who looks closely at how the UFT election works will come up with that conclusion. When it was rigged in our favor, so to speak, there was no point to voting - we trusted those in charge and things were great for many years. Why mess with a good thing? Just vote for the anointed president or don’t - no matter. That changed when Bloomberg took over as mayor and completely outmaneuvered and compromised our once cherished and trusted institution, the UFT. Karma for all the inaction during the UFT’s golden years is upon many of us in our golden years. Outrage upon outrage is going to force a revolt.

Bronx ATR: As much as I hate Mulgrew and the Unity leadership, I do not believe that the UFT elections are rigged. The American Arbitration Association counts the ballots and witnesses are invited to watch. Membership needs to take an active roll in voting for leadership. I thought they would have learned better way back in 2005 when we got handed the shittiest contract ever.

John Q.- Good morning, John. It’s not the counting of the votes that is rigged, it is the entire set up. Here’s some interesting reading if you have the time concerning what I’m talking about. Cheers.