In Michael Mulgrew's latest email (see below), he has resorted to threatening us. If we don't agree to a retiree privatized healthcare plan he wants, then Mulgrew, Henry Garrido (DC 37 leader), Harry Nespoli (Sanitation union leader and head of the Municipal Labor Committee), and other MLC leaders can just foist on us anything they negotiate with the City whether we like it or not.

The New York City Retirees Organization, the Professional Staff Congress (CUNY union), other unions, and organizations such as Retiree Advocate UFT have so far been successful in convincing the City Council NOT to change Administrative Code 12-126 which has protected premium-free healthcare up to the HIP-HMO rate now around $918 a month for over half a century. Mulgrew has decided that he and other union leaders who control the Municipal Labor Committee can just ram any changes on healthcare down our throats without even asking for our approval.

At this moment, we see a possible opportunity to use the Medicare Advantage system to create a new plan for Medicare-eligible city retirees that would have the strength and quality our retirees deserve.

He has obviously not heard any of the retirees who in big numbers have been saying loudly that we don't want a privatized Medicare Advantage Plan with its prior authorizations that Mulgrew tried to force on Medicare-eligible retirees last year. Fortunately, Mulgrew and company forgot to follow the law so they were rebuffed by six judges in two courts when the New York City Retirees Organization sued.

Instead of listening to city employees and retirees and looking for healthcare savings that don't come on the backs of workers or retirees, Mulgrew in his email tells us he is now coming back for "Mulgrewcare Round 2". This time it will be a Medicare Advantage plan from Aetna. Mulgrew's latest includes threats that unless we get the City Council to agree to change Administrative Code 12-126 to allow Mulgrewcare to be implemented, there will be no choice for another plan so retirees 65 and over will be stuck with Aetna's Mulgrewcare, take it or leave it.

The City doesn't care about our healthcare and neither do some of the union leaders. I blame the MLC for pushing Medicare Advantage because they agreed to healthcare givebacks in 2018 and haven't done anything to ensure those savings won't come on the backs of City employees and retirees. The unions and City must agree to a privatized Medicare or it is dead.

Prior authorizations are a big concern of retirees from Mulgrewcare as they delay necessary medical care while patients and doctors wait for insurance company approvals. Norm over at Ed Notes called them Mulgrewcare's "death panels" in a recent post. 34% of doctors in this 2021 American Medical Association survey report prior authorizations "has led to a serious adverse effect for a patient in their care." That is frightening.

I could have had a prior authorization nightmare experience myself. Ten years ago, I was diagnosed with a rare disorder. The specialist knew he had to treat me immediately with medicine that is normally used for another disease. He told me there was no time to wait for the insurance company to figure this out. I was lucky he had free samples of a very expensive drug in his other office so he immediately sent me there. Had I waited, it could have had a very disastrous impact on my health.

Prior authorizations are not a good idea in general but are especially risky for seniors who often have more medical needs than younger people. I don't want to wait around for the insurance company to decide if I should be treated and then appeal to Mulgrew's medical arbitration panel if rejected. This is especially true as we age and we are more likely to need medical care.

Retiree Advocate-UFT will be making phone calls on Wednesday, December 14 to continue telling City Council members to leave our healthcare and 12-126 alone.

Mulgrewcare would impact retirees first but you can bet that active people could soon to be forced onto a different Mulgrewcare plan next. Mulgrew in his own words again:

Our decades-long approach to finding creative ways to rein in health care costs without compromising care has pushed us to explore all available options, including putting out an RFP for in-service health care savings.

RFP means Request for Proposal. I would guess the City-MLC are going to get a lowball offer from some for-profit health company for active City workers and non-Medicare-eligible retirees soon. If they can't change 12-126 and the City and MLC threaten to eliminate all of our choices, the only option at that point would be to put us all on HIP-HMO. I say this to Mulgrew et al, go ahead and try it. Eliminate the choices and watch the rank-and-file rebellion that would follow.

As for exploring all available savings options, there are seven from the 2018 giveback agreement that haven't even been considered to our knowledge. 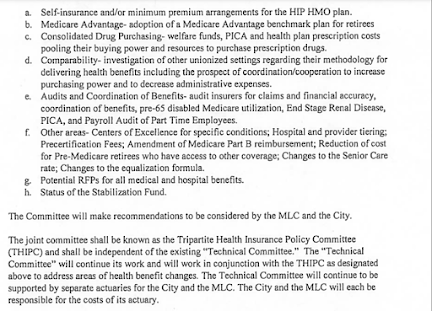 Alternatives to Medicare Advantage (Mulgrewcare) certainly have not been discussed with UFT members. For example, self-insurance means the City would assume the risk and the insurance companies would just administer the health plans. I am no expert and I don't claim to know much here but I can figure out that with a plan covering many hundreds of thousands of City employees and retirees, that group is going to have many healthy young people in it. It might not be very risky to self-insure the City's workers and retirees. Ashland, Oregon's self-insurance plan is described here. In the final analysis, unions should not be allowing any burden of healthcare savings to come down on their active members, their families, or retirees.

Over 90% of active City workers, non-medicare eligible, and Medicare-eligible retirees choose GHI-CBP for healthcare (for Medicare eligible, GHI Senior Care is a supplemental plan that covers 20% of doctor expenses; Medicare covers 80%). The City and MLC want to change 12-126 so they can agree to a low benchmark plan (as low as $7.50 a month compared to the current legal benchmark of around $918 a month) and force all of us to pay high premiums if we want a better (pay up plan). They have been illegally charging premiums to certain retirees for decades and now they are illegally charging co-pays to retirees.

There is nothing the courts have said or in the law that forces the City to offer only one healthcare plan to retirees or in-service members. It is Mulgrew and company that are agreeing to every healthcare giveback and they are attempting to concede even more.

What gets me is why Unity folks put up with this. When will all of you in the majority caucus finally say, "Enough, already!"

Marianne Pizzitola responds to Mulgrew's email. She rapidly and rather easily debunks just about everything Mulgrew puts out.

Last week, the ICEblog explained some of what the UFT in particular has on our side in this healthcare fight. The Contract and law are worthless if the UFT leadership won't enforce them. It is worth repeating some of that earlier piece as it got lost when the Town Hall minutes came out.

UFT members have the law and the Contract with us when it comes to healthcare.

Administrative Code 12-126 protects healthcare for City workers and retirees up to the HIP-HMO rate ($918 per month). If the City Council amends the law, the City and Municipal Labor Committee (umbrella group of municipal unions) could make the amount the City has to pay as low as the City and MLC agree to.  The strong language that goes in our favor:

(1)   The city will pay the entire cost of health insurance coverage for city employees, city retirees, and their dependents, not to exceed one hundred percent of the full cost of H.I.P.-H.M.O. on a category basis.

This law does not need to be amended. Tell the City Council to preserve the Code.

We have even more protections as UFT members compared to other City workers and retirees on healthcare. Look at Article 3G1 our UFT Contract.

The Board agrees to arrange for, and make available to each day school teacher, a choice of health and hospital insurance coverage from among designated plans and the Board agrees to pay the full cost of such coverage.

Choice of plans with the Board paying the full cost of such coverage. That sounds pretty strong to me. The UFT also has appendix E in the back of the Contract that further outlines healthcare benefits.

Healthcare is a mandatory subject of bargaining that is protected by the Taylor Law as well as the 1992 City-MLC letter of agreement on healthcare.

The contract is on our side as is the 1992 letter of agreement. That helps active people.

This is from NYSUT:

Why isn't the Union fighting back? 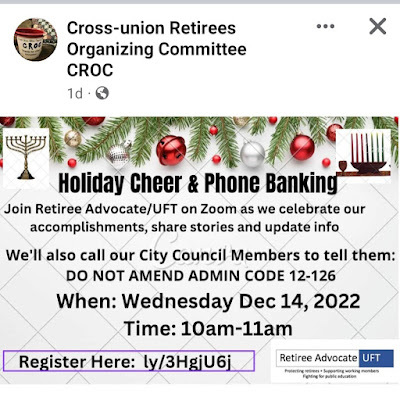 So much for being "essential workers."

Why was Mulgrew even re-elected? Talk about members being asleep at the wheel...I didn't even receive a ballot until AFTER the election. That's how honest the UFT is. Mulgrew and his utterly corrupt cronies MUST be slammed down hard. Today, one's healthcare can literally be one's life. And my life is way too important to me to leave my healthcare in the hands of even more layers of bureaucrats and beancounters, each with the ability to deny me lifesaving care. If I still lived in NYC and had been aware of your phone bank mass calling of City Council members, I would gladly have participated. But I said adios to the Rotten Apple in 2019 and took up living in the green Eden of the Baltimore suburbs in 2019. So I don't have a Council member to lobby. I donated to Marianne Pizzitola's organization to help with the fight. What else can I do? As you pointed out, the retirees, being older, are bound to have greater need for healthcare. For Mulgrew & Co. to start coercing elderly people, issuing threats and other ugly behavior toward them, is nothing short of heinous. I only pray that the judges continue to side with us and toss Mulgrew right on his butt.