Outstanding coverage of yesterday's rally and march to preserve government-run Medicare for NYC government employee retirees at AM NY.

Retired NYC municipal union employees are wrestling with a change they say could negatively affect their quality of life.

Hundreds of retired city employees converged in the shadow of National Museum of the American Indian amidst a record-breaking heatwave on June 30 to decry a mass shift to their health care plans. The Municipal Labor Committee is set to alter the Medicare plans of 250,000 individuals to a for-profit plan: Medicare Advantage.

The scores of union members were joined by family, friends, and other supporters as they brandished picket signs and banners demanding a moratorium on any change to the city’s existing Medicare plan and the ability to remain in their current Medicare Health Plan without raised costs or loss of benefits. If switched over to this for-profit plan, the primarily elderly protesters say it will significantly increase out-of-pocket costs, making those who suffer from several ailments or are severely ill pay skyrocketing prices. Additionally, those in attendance feared that the switch could reduce their network of providers.

“I’m here because I’m mad! We want our Medicare! Not privatization,” announced Julie, a DC 37 retiree who, along with the demonstrators in attendance, are fuming with the Municipal Labor Committee for attempting to transition to a privatized plan. Retirees like Julie shared that they labored all of their adult lives so that they could retire with peace of mind, something they say this transition would strip them of.

“We are going to stop the sellout of our traditional Medicare Plan to private health insurance! For a quarter of a million municipal retirees, and for hundreds of thousands of future retirees, many of whom are here today, it is a matter of life and death and for big insurance it’s just the biggest lollipop in the candy store. It will be $600 million in healthcare savings for the city, and $600,000 in healthcare cuts for us. Our union leadership must not let the city wiggle out of its responsibility to administer our traditional Medicare benefits,” said Bennett Fischer, a retired UFT member, calling Medicare Advantage a privatization scheme.

Read the entire story, please. The movement to stop privatized Medicare for NYC municipal retirees is gaining momentum. Please sign the petition if you have not yet done so and encourage friends to do the same.

I chauffeured my wife Camille to the event. Camille was one of the speakers. 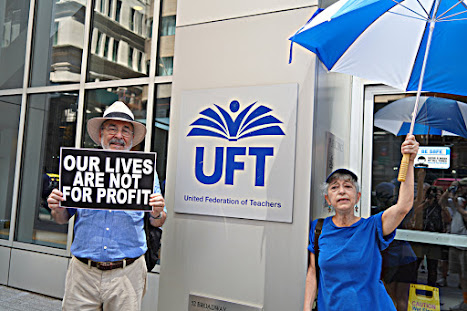 UFT's Michael Shulman and Gloria Brandman in front of UFT HQ at the Tuesday rally and march.

Labor Press has a very in-depth, well-balanced piece on the rally that covers the UFT's side as well as the ralliers. Since the UFT and DC 37 are the two largest city unions and the Municipal Labor Committee has weighted voting, it is fairly accurate to call Medicare Advantage "Mulgrewcare."

Part of their discussion:

“A new supplemental plan would not be any more privatized than the current one,” the UFT said.

“That’s not really true,” Cross Union Retirees spokesperson Bennett Fischer told LaborPress the day after the rally. “The payments and the paperwork are all going through a private company.”

“I hope they’re right,” he continued, but he’s skeptical. While the MLC might have the leverage to negotiate a better deal than the usual private insurance, he said, “we haven’t seen the actual plan.”

“If a new plan is put in place, it would provide access to all doctors and health services that take Medicare, which includes the doctors members are already using,” a UFT spokesperson told LaborPress.

“They say it will be just as good, but we know better,” says DC 37 Retirees Association President Ed Hysyk. “These for-profit companies make money by restrictions on health-care options.”

Thank you, Camille, and everyone who came out!

Gosh, if only our "friends" the Democrats were in charge, then things would be different. But don't forget to work those phone banks in the fall!

I don’t believe anything that comes out of the mouth of Unity. I do not want an Advantage Plan. It’s dogshit. Mulgrew can says it’s a dozen roses all he likes, Advantage is still dogshit, not roses.

Mulgrew is lying. The only way that the private companies make money is by taking away choices and benefits. You will not be able to keep your doctor if your doctor does not accept your insurance. You will be restricted by their gatekeepers. They will not be able keep their promises. There are no guarantees here.

Once again, Mulgrew is lying.

It's true, I live in NJ. When in service current employees were sold out to Emblem Health GHI,any of the doctors I saw where I lived stopped participating shortly after. Hospitals now participate as "Out of Network" $$$$ Cha-Ching! I have a hefty drive all the way to Staten Island or Brooklyn just to see a doctor without some kind of BS about billing, in network, out of network, and get this spin,
I found a doctor specialist who is in network and only about 15 miles away. He has 2 offices, only one address shows as "in Network" and same doctor. Only thing is all the billing goes out from the other address so they billed me "Out of Network" and nothing I can do about this scam. This is ridiculous! I worry what would happen if I ever needed an emergency room or hospital stay. I would have to go someplace 50 miles away, away from my own family just to avoid headaches and mass confusion over these managed care rules. Next they'll be charging fees if you live outside of N.Y..
Sure Emblem has lists of doctors "in Network" Still not in my town anymore.
These are the kinds of headaches that inevitably will happen especially if you retire outside of New York. (and not too many people want to stay there anymore)

Just got an email from North Shore Obgyn (Bayside) that they will no longer accept Emblem Health GHI as of September. Im really upset bc I love the practice and the doctors there helped deliver my first baby in April. Looking for other OBGYN recs in/near Bayside? It looks like a lot of doctors are dropping Emblem Health.

I'm also having issues with Emblem Health GHI and expect my in-network doctors to soon drop them. Every bill or procedure gets rejected and months later I receive a surprise bill. Then I need to call both parties to try and straighten the mess out. You naturally don't hear back if it was resolved until another month passes by and you get billed again.

We’ve had it droned into us that unions are important. Without unions we lose good benefits. Our union is directly responsible for the diminishing of medical benefits if this goes through. The tide of pro unionism among union members is changing because we’re paying these scumbags to screw us. I can get shitty medical benefits in a non union job and in some cases better benefits. UFT already negotiated shittier pension benefits for newer teachers. Now comes the shittier medical benefits. At what point does the membership start saying we’re just not paying you assholes anymore? After we’re dead from lack of good coverage or in debt from medical bills? When is enough enough?

We got an email from Mulgrew saying that he filed a grievance for Spring Break pay.

Unions need to be unions by and FOR the members they represent, not an extension of the political, governmental, and organizational entities that are trying to screw us. How do we get our unions to be real unions again!?

Several times I’ve heard the following: ‘You don’t become a teacher to get rich’. However, that was always countered with ‘ but you do get good union benefits as a trade-off’ —which always included a decent pension package and medical care coverage from your in-service days through retirement. However, there is now a Tier 6 —which is quite subpar compared to Tier 4–and now there is a potential downgrade in medical coverage - with the probable changeover to a privatized Medicare Advantage Program—although Mulgrew keeps insisting that’s not the case.

So the question becomes, how much power and leverage does the UFT and other Civil Service unions really have these days, II recall a few years ago there was an Election Day item that called for a meeting of the New York State Constitution which that could have hurt guaranteed pensions, the TDA and other hard fought union items. The unions fought tirelessly to make sure that did not happen.

But, now Mulgrew says he is powerless to do anything as part of this MLC—and he doesn’t want to have medical items brought up at future UFT negotiations with the city as he shoving this change down the throats of the retirees and future retirees. Just wondering if all the other city union chiefs take that same position.. How does the UFT and other unions agree in 2018 to help the city save $600 million dollars in healthcare costs—without knowing that it has to eventually come out of the pockets of its members.

Although, I don’t agree with many things that Bernie Sanders has said—but he appears to be fundamentally correct when it comes to healthcare in general. The healthcare insurance industry agents are in the pockets of just about every politician in this country-both Republican or Democrat . And it’s all about greed and profits.

Pension changes were not negotiated. Tier VI was decided unilaterally by the legislature.

Per the heads of several welfare funds, Mulgrew is responsible for this whole disgraceful betrayal. The opening salvo was the 2014 agreement Mulgrew set up with DeBlasio for the UFT retroactive money in exchange for health benefit cuts to all of the 140 unions in the MLC. This was a direct negotiation that offered up all of the stabilization fund handing over $3.4 Billion and $1Billion in cash. Then on the heels of the first cuts in 2018 DC37 decided to improve benefits for hospital employees. Mulgrew upped the ante by giving away $1.1 Billion in additional health cuts, while getting $10Million for the Welfare Fund. All has been done on the backs of all the municipal workers. The vendor has been chosen, Emblem Health Blue Cross Blue Shield Alliance. The Secretary of the MLC, head of the Teamsters Union, Gregory Floyd, is on the board of this EHBCBS Alliance. Is this corruption?

3:41 thanks for clarifying but then the additional point is the UFT isn’t needed to protect pensions because they evidently can’t.

Mulgrew didn't push enough on the ERI, not sure if can trust him on this?

Here's a thought. If every single municipal retiree in the city of New York a number in the millions probably is on Medicare Advantage then don't you think most of these doctors would have to accept it?

This is just a stupid comment. How do you know how hard Mulgrew pushed? And if a lame-duck mayor just says no no no then there is nothing you can do about it