New York City launched a new anti-coronavirus (COVID-19) program that officials said will help schools stay safe, so that they can stay open.

“This is how we’re going to look at schools from this point on — keep them safe and keep them open,” de Blasio said. “We have a lot of evidence now that’s told us this is the approach that’s going to work for the future."

Whenever there’s a positive case in a classroom, each child will take home two at-home test kits over the course of seven days. Those who test negative and are asymptomatic can go back to school causing less disruption to their education, de Blasio said.

An increased state and federal supply of take-home test kits allowed the city to launch the new program, the outgoing mayor said.

Compared to what was previously available, two times the PCR tests will be available each week in every school throughout the city for vaccinated and unvaccinated students along with staff, who de Blasio said have a 96% vaccination rate.

There will be no tests before schools reopen, because the mayor said he wants to ensure a smooth transition back to operation.

Gov. Kathy Hochul and Mayor-elect Eric Adams, who will be in office when the new programs are put inplace, joined de Blasio to support the announcement.

“We spent $11 trillion fighting COVID. It is time for us to realize that this is a resilient city and a resilient country,” Adams said. “We must reopen our city and we can do that.” 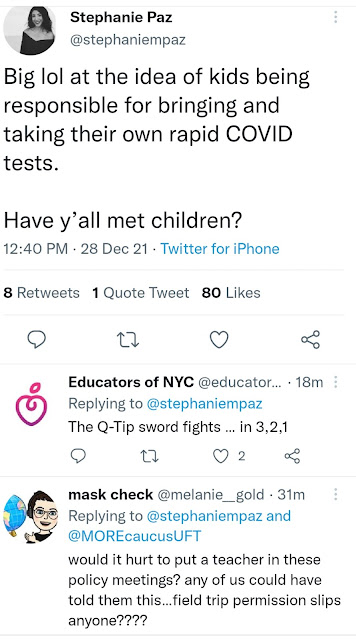 The UFT statement:
On Dec. 28, 2021, Mayor Bill de Blasio (along with Governor Kathy Hochul and Mayor-elect Eric Adams) announced changes to COVID safety protocols in schools that will take effect in January 2022.
In response, UFT President Michael Mulgrew issued the following statement:
Teachers are prepared to do their jobs starting Jan. 3rd. The real issue is whether the city can do its job — ensuring that new testing initiatives are available in every school and an improved Situation Room is actually in place by next week.
We want to thank Governor Hochul for listening to our request, and for providing city schools with 2 million instant tests so that anyone with close contact with a positive case will be able to know immediately if they are infectious and must quarantine.
We’re also glad that after weeks of lobbying both the current and the incoming administrations, the Situation Room is being rebuilt, after basically coming apart in the last several weeks, and that the system will increase its ability to provide PCR tests to more adults and children every week.
We are moving closer to a safe re-opening of school next week. But we are not there yet.
Posted by James Eterno at 12/28/2021 01:28:00 PM

And the uft gave up. As always.

"We are moving closer to a safe re-opening of school next week. But we are not there yet."

Wait, why do things need to improve? Don't we already have the gold standard? And the dues payers and dues collectors agreed to a less than safe standrad? The uft didn;t keep us safe? the DOE lied?

I can't friggin' believe there is no remote options for families. Adams is loved by many in the black community and those are the very people who are demanding a remote option. Bottom line is that next week is going to be a shit show of mega proportions.

Black people are demanding a remote option? I get numbers are up but this isn't the same covid killer from 2 years ago. We have a common cold on our hands. There's no need to be nuts about this.

Hey Muddlegrew! where are the tests for the teachers?

Hey anno 2:45, I just got over Covid. I was fully vaccinated and it is NOT like a cold at all. It put me on my ass for 3 weeks. Any yes, black people are demanding a remote option. Black folks are the least vaccinated in the city and many do not trust the City/DOE to keep their kids safe. Today's new covid regulations prove that point in a big way.

Politicians don't live their voters once they are in office.why would he be different?don't vote for devil woman for gov next election

Mulgrew can't threaten.he has to show he is their partner.it would hurt our cause to just have him flat out refuse.unfortunately, the plan falls far short and won't make a bit of difference for all the reasons previously listed in other posts.its a show that will need to fail and cause chaos and maybe casualty in order to make a change.we and the kids are lower than shit.lower than untouchables. Betcha they don't have n95 by Monday. They need a huge steady supply of tests and be able to rest repeatedly.in the fall u suggested letting the nurse administer a rapid test at their discretion.it went nowher.then u have morons saying u can't swab my kid.nobody addressed kids who cant/don't mask.and staff who still refuse to mask. A huge circus.

All should have a remote option not just blacks. All should not trust the DOE, mayor or gov to keep them safe. Blacks and the poor have historically been screwed by the government and now is no exception. I am very nervous. They including Adams preach that "NYC schools are the safest places to be. The facts speak for themselves" This is a lie. The numbers are low only because of no testing.

I think it is truely scary that Adams had drank the Koolaid too and is lying to his supporters.

No protection still for Pre-K and 3K! LA has testing for these grades.

Mulgrew is a disgrace! Double the situation room?! Big deal! That is still not enough. They eed 5 times the staff. I still have not recieved a letter that my student and admin tested postivite for covid a week ago!

Mulgrew step down now. You are not effective! We are fending for ourselves.

They said that schools are reopening for the "well-being of students and families". Notice that they never give a damn about the well-being of teachers.

5:12-they don't give a dam about teachers. We have no N-95 masks, no ventalation in hallways and stairwells, student's who come to school sick, parents who sign waivers and lie by sending their children to school with symptoms. Which even if not covid makes them take their masks off because of runny noses, students who refuse to wear a mask and parents who don't answer the phone to pick them up because it's our problem during the day...

This is the worst profession to become a part of now more than ever..they wonder why they can't recruit more minorities to teach..I say they see the shit we go through and they are smart enough to stay far far away from this terrible job.

We pay dues for no support, no protection, Lord help us!

What other "profession" with "professionals" with Master's degrees plus more are put in room with people for 6 hours plus during a pandemic without ventilation no vax, no testing of the people we work with all day???

The answer is none! We are sitting ducks! Then we have admins coming in to observe us! It is truly sick.

Young teachers get out NOW! People who can retire get out NOW! I wish I were a garbage man, no student loans, no years going to school, no work brought at home, 20 year pension, 4 years to top salary...A union president who has balls ...Mulgrew is an embarrassment.

The clear message I got from the press conference today is teachers and staff of the NYCDOE lives don't matter. Adams, DeBozo speak about their grown kids..How about having them work in a NYC public school classroom all day everyday in the south Bronx, southeast QUeens, Far Rockaway, etc. Instead they speak about what the kids need...

I am not very confident that all parents and students will understand how to administer the at home test properly. I have heard of false negatives with those tests. That makes this more risky, of course. I hope the directions in the boxes are printed in multiple languages. I work in a bilingual French school. The directions need to be in French, Spanish, English,etc.

Many of the comments here are both embarrassing and pathetic. How many NYC teachers have even been hospitalized or killed by COVID since September 2021?

It’s like you are stuck in March 2020 and just begging for the nanny state to protect you.

Ues.a clear signal that the city can crap on us in matters not covid as well thank muldoo

959-If getting covid is nothing and you call us embarrassing and pathetic them why does Deblozo still hold empty daily briefings? If someone is there they are test first and 6 feet apart.

Why is Apple, GM and many many other companies still have their work forces at home????


Why is our safety and comfort level not of importance? We are paid less than many of these workers? Our working condition even beofre covid were far worse. You know the city is lying about what is happing in schools yet your focus is to attack other teachers? Clearly you must work only for our weak, inept union and forgot what it's like in a classroom.

Sure so it put you on your ass. You got sick. People get sick. We don't stop teaching children because you got sick. Point is people aren't dying like 2 yeara ago. Also the majority of people aren't "put on their ass for 3 weeks" with omicron.

No.just a phone number to get it translated.or maybe they will insist that staff translate it and not pay them for their work!

So when will be know if they put these things in place in time for Monday? Will they pull it off with a shortage of tests as well as shipping delays? Maybe that is also bidens lie as well.i trust nobody. If I get fed up of our leaders, where in the world is it better?
One of my health care providers closed again due to covid numbers.
I also saw that she will take traditional Medicare but not Medicare advantage.bad omen for retirees.

8:10 I agree.why are we hated? Is it because the job is 10 months?is it because we babysit for free?
Even dentists and other health workers closed.ehy are we unimportant?the age-old question.the more we do, the more they doo on us.