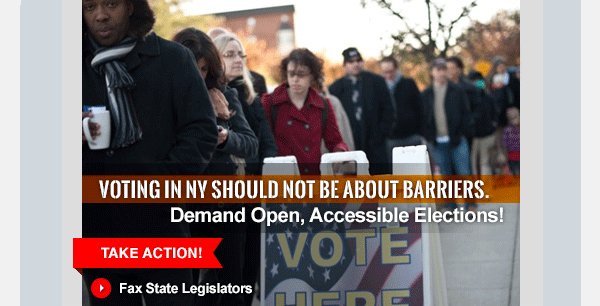 This wonderful NYSUT tweet is about making voting in elections easier for citizens. However, when it comes to union elections, it's not about easy access to the polls, it's about barriers.

Most of the state Unity Caucus, including the huge UFT contingent, voted against a constitutional amendment that would have allowed locals across the state to vote in their own election districts in NYSUT elections rather than having to make the trip to New York City to cast a ballot.

The majority of the locals in the state did not send anyone to vote in the NYSUT election last month. Many of the small locals cannot afford to send representatives to NYC where the election is held.

The hypocrisy is there for all to see.

This is no big surprise as elections are truly about obtaining or maintaining power for too many people who run for office in unions or government.

That is a sad state of affairs.

It's up to the people, or in the case of the unions the membership, to keep their leaders honest.

After reading the comments from yesterday's post, it is clear to me that many UFT members are planning on sending a message fo the leadership by leaving the union as soon as the Supreme Court allows them to stop paying dues. That is scary. Even a weak union is better than none.

James, can you simply explain what it means if a teacher stops paying dues? Leaving the union?

Also are atr rotations for the year officially done?

Today, agency fee payers get all benefits of union but still pay dues at a slighly lower rate. They cannot vote in union elections. If supreme court rules as we all expect them to against unions, non union members would get same benefits without paying dues. City pays welfare fund money to unions. UFT would be broke if masses leave. Since they negotiate as if they have no leverage already, it will take a while for losses to be felt. In the end, without a union, public education is in trouble.

Thats just it, it seems the answer is, well its better to have a union. This allows the union to fuck us and then expect us to still be greatful. Look a the last contract, with the full strength union with all our dues with a mayor we like. Come on. Sorry, im out. I will take my chances. I wont relist what wad said in the previous post yesterday but weve been screwed up and down.

If there is no union - awful as Unity Caucus leadership of the UFT is - you're not taking a chance, you've made a losing bet.

As James correctly says, a bad union is still better than no union at all

I agree with you Michael, but I want to see first what kind of ATR agreement was signed into effect - without our input or notification.

Again, thats why unity believes they have a free ride, because we suckers know that we should have some union. Well Im saying no more. This has gone one for too long, and this job has become too disastrous, and again, look at how we were ripped to shreds in every aspect of the 2014 contract, while unity insisted, not that it was just a contract, it was a great contract. Do you know how many times i email people who have these cushy office jobs making between 150K and 300K and get no response, then i waste time and money going to the boro office, where im told to pretty much drop dead, we dont know the answers, we have to ask someone else, we cant help, we wont grieve, we know you get verbally and physically assaulted, we know the travel clause was violated, etc...But too bad.

And these people never set foot in a school. Easy for them to say that its not so bad, blah, blah, blah. You know how many times Ive emailed Mulgrew and Amy asking for info on the atr situation. Not even a response. I asked, are we gonna get to list 6 schools in the city and be guaranteed 1 of them like happened 30 years ago. I asked what about the fact that schools all start and finish at different times. What about parking. What about location. NYC and each borough is quite large and if we are being force placed can cause many issues. What rights o I have. What about my family? Not even a response. remember, Farina said no forced placement.

LUCKY? I almost got shot yesterday at work, as a teacher, in a school.
A 15-year-old student was under arrest Wednesday afternoon after he allegedly brought a loaded gun to school.

Around 1:45 p.m., school and administrations at I.S. 171 Abraham Lincoln, at 528 Ridgewood Ave. in Cypress Hills, Brooklyn, notified school safety agents that the boy was agitated, according to the school safety officers’ unit.

The agents brought the boy into a room with a school official and questioned him, the union said. The boy became more agitated and defiant with school authorities and then became disorderly, and the agents who went to calm him saw the gun sticking out of his pocket, the union said.

The agents seized a .25-caliber firearm from the boy, the union said.

Police said there was no indication that the boy was planning an attack.

Mulgrew deletes email en masse without reading them. Amy and her entourage work for Mulgrew, not us. They are going to have to release the info - the cat's out of the bag and ATRs are furious. The longer they wait the worse it looks. Don't worry it'll be another 'Victory!'

I was just thinking, they are probably crafting the writeup they will post on the front of uft.org, how they got us all back into schools, we all will have a regular schedule, we will all be a part of school communities...Thanks to the mayor and chancellor, atrs are placed back where they belong. Yeah. Fuck you. Still waiting to have school choice. If Amy was telling the truth and there are only 800 ATRs, with 1600 schools, whats the problem? Let us provide a list, the DOE can then choose which school on the list we go to.

Just like how they put up dollar signs $$$ for our 8 year old raise we are getting now.

QUESTION: So what would non-dues paying teachers NOT get if they quit the UFT? Would they not be able to get a free lawyer if brought up on 3020a chargers? Can they still get a parking permit? I would like to know what teachers will loose if they become non-dues payers. (Besides not being able to vote in UFT elections is there really anything that non-dues payers will miss out on?)

So let's see, all the rights and benefits of being a union member (which are zero) for zero dues. Finally sounds like a fair deal.

Currently $1,365 for dues. Guess what they go up again next check. Yes, i will run to stop paying.

Due process, tenure, and seniority, are all NYS labor laws. Even if the UFT disappeared next week, those laws would still be in place. I really want to know about what Anno 5:15 was getting at. What would a non-paying, ex UFT teacher loose by leaving the union?

Public education is in plenty of trouble with, or without a union.

Its because the inmate students are running the asylum. that has caused the drop in education numbers and rise in crime and violence and problem numbers.