For the first time in my three years at Middle College High School, the students beat the faculty in softball at the annual field day at Bethpage State Park.

It was a very close 5-4 final score. Faculty had the tying run at third with no outs in the last inning after we came back in that inning from a 5-2 deficit.

We then hit into a double play and a ground out to end it.

Students had some star players such as Joseph Encarcancion and Austin Duran.

On the girls' part of the student team, there were three very impressive infielders who are players on the MCHS softball team that made the city finals. Two of the three, Kiara Ognibene and Karolina Bednarzscyk are deaf and use American Sign Language interpreters during softball games. The other was Ashley Vilella who plays first base quite well. This softball team has a story to tell that I hope someone in local press picks up on.

As for me, no hits in two at bat but I can still play OK in the outfield. I did not embarrass myself out there as I caught or fielded cleanly everything hit my way.

Congratulations students on your victory!

Great time had by all at field day. For a few hours I almost forgot  that I am employed by the New York City Department of Education. 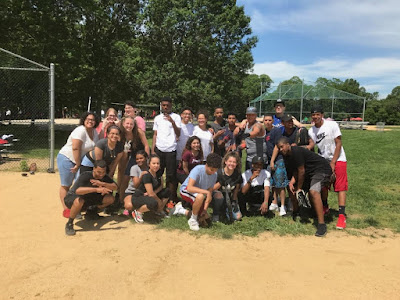 Beautiful pics. It seems as if everyone had a blast.

Great pics. It's a blessing to be in such a great school, with great students, and a wonderful staff with a supportive administration. Kudos to all! Congrats to the champs.


Is it true that you have be excessed?

Salary comes out of school's budget and now principal's must hire ATRs--harassment is on the horizon...lordy