A day after posting, we received the details from UFT on Instagram. Teacher's Choice is $250 for 2018-19. Spending commenced August 1. Save those receipts. However, please also read the update below. 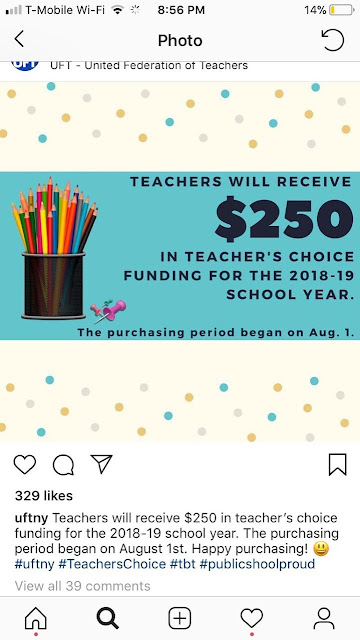 Karen said...
I called the DOE phone number for Special Projects on August 1st, and was told that the City Council had not approved Teacher's Choice funding, that I should not buy anything until the announcement was made at the end of the week (meaning today, 8/3), that there was a possibility we would not receive funding. So frustrating- so many sales have come and gone and I've already spent quite a bit out of pocket. There's enough to be done over the next few weeks that having the $250 would make it easier! Wish they would just make an announcement.
If the Department of Education and the UFT cannot get their act together to announce what is going on with a program as popular and non-controversial as Teacher's Choice, we may be even more trouble than we think. Yes, I know this isn't the biggest problem in the world but symbolically this delay just looks bad.
Posted by James Eterno at 8/02/2018 09:40:00 PM

If doesn’t make all you losers stay in the UFT, I don’t know what will.

I'm staying and hope everyone else joins me. It won't get better if everyone leaves.

Not if everyone leaves just 10 - 50%. That will get the Mulgrew’s Fat Ass Crew into overdrive.

Hi! Thanks for the info. I can't find the link anywhere. They usually send an email. Was this a Twitter post by UFT?

I got this from a friend. Will follow up.

If you do not receive your Teacher’s Choice payment in a timely manner (or at all), promptly email Donna M. Marto at the DOE.

She is the Director, Office of School Services which is part of the Division of Financial Operations.

Her email address is:

If you contact Donna, send copies to Mike Sill at the UFT and Howard Fein at DOE’s Teacher’s Choice Unit:

Mike Sill can kiss my ass!

Can anyone find it anywhere else? Help us out please.

We will keep up with the story. That's what we can do.