MAYORAL ELECTION RESULTS RELEASED AND RETRACTED; AT LEAST THERE IS SOME TRANSPARENCY IN THE PROCESS UNLIKE IN UFT ELECTIONS; AVIATION HIGH SCHOOL ELECTS IBETH MEJIA CHAPTER LEADER

Rank Choice Voting is off to a rocky start in NYC. 135,000 test ballots mixed in with the results. 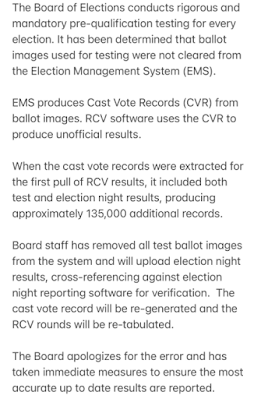 There is no truth to the rumor that the UFT and American Arbitration Association were involved in the counting. BOE released the results and then watched as the campaigns noticed there were more votes released today than on election night but the absentee ballots have not even been looked at. BOE then admitted their mistake and they will attempt to fix it. This system  does need to be investigated and changed. The UFT's system of elections is even worse.

The UFT hires a company called the American Arbitration Association to count votes. The AAA tabulates ballots in UFT general elections and this year they were used for all of the chapter elections. The UFT releases the results of these elections when they damn well please. There is no transparency in the process for school-based chapter elections. Candidates have no access to the actual ballots if they exist at all and have to just trust the results are honest.

The delay at Aviation High School in releasing the chapter leader election results caused a mini-chapter rebellion last week. The election that was postponed was finally held last Thursday, June 25 and AAA told one of the candidates, our friend from both Jamaica HS and Middle College Ibeth Mejia, that the ballots were already counted when she called on Friday morning looking for the results. AAA said she needed to ask the UFT for the results.

Ibeth got in touch with election queen Yasmin Colon and Borough Rep Amy Arundell. The UFT's position was that they had to "certify" the results. What the hell does that mean? They sat on the results for hours. Then, ten people from Aviation emailed UFT officials demanding the numbers and within an hour they were released. Other schools waited for two days to hear what happened in their chapter elections as did Aviation in their delegate election. This is ridiculous. When the UFT knows, the candidates should know.

Before 2016, opposition people went to UFT vote counts and as the votes were counted by the AAA, AAA told both the Unity people (Michael Mulgrew and Randi Weingarten's political party) and the opposition representatives the numbers as soon as each division was tabulated. Nobody questioned it. Since 2016, AAA now gives the results to the Unity-UFT folks and they hold them for as long as they like. It used to take less than a day to have over 95% of the votes counted and now it takes days. It took almost a week for them to announce the Retired Teachers Chapter election numbers. This has got to stop. When they know anything, we should know at the same time as should our members.

In the end, Ibeth Mejia won the chapter leader election at Aviation with 55% of the vote! She takes office on Wednesday but she is already working hard on behalf of her members. Ibeth is the first ever woman chapter leader at Aviation HS. Congratulations!

Along with her friend Luli Rodriguez, they welcomed me and made me feel at home when I landed at Middle College in 2014 as an ATR. They helped turn what was an often depressing time as an ATR into one where I eventually landed a provisional and finally a regular position. Ibeth, Luli, and our friend Virginia ran my successful campaign for delegate at MCHS in 2015 when I was still basically an ATR and had no guarantee I would return to serve out the term. Ibeth was also a strong supporter back at Jamaica High School. Luli was also elected this year as a delegate at Heritage High School. Congratulations!

Any chance the NYC mayoral voting process is now overly-complicated on a number of fronts?

This is the kind of election news that Trump could have a field day with.

Trump could have a field day with it, and for the record I am a Trump supporter who knows he lost his election. Fact is, they were transparent. There is nothing wrong with the results by way of fraud. The real question is why report any results anyway? Wouldn't the entire process have to begin again once the absentee ballots come in? What if by some chance Garcia, Wiley or Adams gets over 50% with the absentee ballots then it's over without the 2nd, 3rd, etc. choices.

The BOE just created confusion and the appearance of error when there was no need to say anything. What really needs to happen is election reform that requires debates to end a few weeks before the election. Absentee ballots must be mailed in early or hand delivered to the post office by election day. We can't go weeks waiting for votes to come in. This will always undermine the integrity of the results.

@6:40 we will speak again in august when you see how 100,000 minimum TRump won by in Zona, then you will say to yourself omg that means he did win Georgia, Wisconsin, Michigan , and Penn. Safest election ever, so nothing to be scared about to audit.

Our country can never use dominion again, paper ballots that's all, thumb fingerprint or something on mail in to verify besides signature. Then whether or a dem or republican win, it is an extremely more fair election. End of the day that's all we should have.

FACT CHECK: More than a thousand independent audits and recounts since Election Day in November 2020 have demonstrated the accuracy and reliability of Dominion systems. Maricopa County has already conducted post-election audits using accredited, independent lab experts and clear, lawful procedures that were observable by bipartisan witnesses and the public.

Per the S. Department of Homeland Security's Cybersecurity and Infrastructure Security Agency, "if a ballot has issues that impact its ability to be scanned, it can be hand counted."

Every ballot cast in Wisconsin has an auditable paper trail. Following the election, voting equipment is randomly selected for audit, and the paper trail is audited against the electronic vote totals; this process is conducted as part of a public meeting.

The Department of State directed all Pennsylvania counties to select new voting systems with voter-verifiable paper ballots by the end of 2019 to ensure that Pennsylvania voters are voting on the most secure, accessible, and auditable equipment available.

As verified by the state of Pennsylvania, Dominion systems are capable of producing paper records and are 100% auditable, with testing, reviews, audits, and recounts subject to oversight and verification.

ATLANTA)-On the first day of early voting in Georgia, voters around the state praised the new secure and verifiable paper ballot system. Georgia voters were particularly happy about the printed paper ballot, which many noted allowed them to verify their vote before submission. Additionally, the system gained wide praise for being easy to use, fast, and reliable.

“I am excited to hear that Georgians like our new system and are confident in the paper ballot process,” said Secretary of State Brad Raffensperger. “We waste a lot of time and resources fighting with fringe activists and beating back frivolous lawsuits designed to distract us from our mission of expanding secure voting access. It is good to hear that the voters, the people whose opinions really county, are happy with the new secure paper ballot system.”

New York's Board of Elections is known as a patronage disaster just like the UFT.

Democrats are at a disadvantage nationally because the Electoral College disproportionally favors small states and in the Senate Republicans in rural states over-represent tiny populations. Even in the House of Representatives, Republicans control redistricting in many states and gerrymandering is real so Democrats are disadvantaged there too.

Then, Democrats have to fight off the corporate wing of their own party too. The deck is stacked in favor of policies that do not benefit the working and middle classes. As long as we continue to battle each other in culture wars, the economic situation for the many will continue to worsen nationally.

When does Anon2323 admit to being someone who believes we never landed on the moon or Elvis is still alive? And when Trump dies this one will claim he say Trump be resurrected.

James we both can agree BOE is a disaster. However, your sources are horrible. Could care two shits what dominion says to back their own machines up. Of course, they are going to say this. Oh yes Georgia, where they pulled ballots out when everyone left and scanned hundreds of thousands or the USBs that are passed around. In one month we will know for sure James. DEms are at such a disadvantage with a 84-0 lead between cali and new york haha. Then they try and infiltrate georgia, texas and arizona for power.

@12:31 be it as it may watch this clip and decide for yourself. I have always been skeptical why we have not been back to the moon so frequently in 2021 with all this technology.
https://www.youtube.com/watch?v=pY0vRGFUYHE

I have no interest in supporting Dominion or corporate Dems. Point was there was a paper trail.

You said, James. Dems are at such a disadvantage with a 84-0 lead between cali and new york haha. Then they try and infiltrate georgia, texas and arizona for power."

One electoral vote represents how many Californians vs Alaskans? Do the math. It is inherently unequal.

I stand by my comments about Trump losing the election. I am sure there was fraud somewhere but not to the amount that would overturn the results. Move on.

Without the electoral college the major cities in this country would be all that's needed to win the presidency. As it is they only campaign in a few battleground states where the vote is close.

And James (who I respect tremendously for this blog), while you are correct regarding the electoral votes in relation to the population of particular states you are not correct based on your comparison of AK and CA. Alaska, along with every other state, is automatically given 3 votes to start. 1 for a guaranteed Rep and 2 for their Senators. After that every vote is added based on population. So as you see states like Alaska, including MT, WY, ND, SD, VT, and DE all have 3. Those states I mentioned all have 2 senators and only 1 Rep in the House. They were given no extra votes. CA received 52 extra votes compared to AKs 0. After the first automatic 3 it is proportionally accurate based on the most recent census.

It is simple math:

Electoral college is undemocratic in favoring small states. Am I going to now have to deal with some Republican talking point on how this is wonderful?

The UFT seems to always pick the wrong candidate for office.