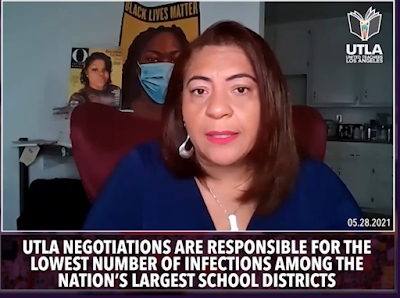 The video linked here and embedded below is from UTLA President Cicily Myart-Cruz. On May 28 she compared Covid-19 numbers from schools in the three largest cities in the United States. Nobody here will be shocked that the NYC schools finished last by a large number since buildings were open most of the year. Whenever UFT President Michael Mulgrew and Mayor Bill de Blasio say how safe the NYC schools have been when it comes to COVID-19, play them this recording from Myart-Cruz.

Myart-Cruz asserts that not reopening too fast in spite of political pressure saved lives. She subsequently talks about how she has surveyed her members to find out how they want the federal and state COVID recovery funds to be spent. In the video, she announced that the members responded that they want lower class sizes and salary increases as their top two priorities. When is the UFT planning on surveying its members on how to spend stimulus funds?

Give me a militant union like UTLA that involves its members over one like the UFT that believes backroom deals can resolve all of the issues the union's rank and file face.

Please watch the video for yourself.

How can we entice Cicily Myart-Cruz to run to become president of the UFT?

We need to clear out the useless, corrupt trash we have now.

She's got my vote.

The money will be flowing and nothing will change, just an improved graduation rate!

Mulgrew doesn’t care. He does whatever he wants, whenever he wants. Mulgrew’s viewpoint - If you don’t like it, please drop out.

Can we write her in? Hahaha. It really is depressing to see how strong many other teacher's unions are across the nation compared to our DOE public relations wing, I mean, "union."