After waiting for decades for the opposition to Unity Caucus to finally break through, there is a significant drop in support for the Unity Caucus in this spring's Retired Teachers Chapter election. Retirees make up Unity's strongest base of support and as such they handicap any opposition group that wants to challenge Unity, Michael Mulgrew's political party. This invitation only caucus that has run the UFT since the early 1960s demands that followers support caucus decisions in public and union forums. EdNotes is reporting tonight that the opposition to Unity, the Retiree Advocate, has received 30% of the vote in this spring's election.

That may not seem like much but if we look at the results from the most recent citywide UFT election, in 2019 Unity received 89% of the vote and the three opposition groups could only muster a combined 11%. I am no math expert but for opposition to go from 11% to 30% in just two years is a significant gain.

From 2004 through 2016, Unity's share in general UFT elections ranged from 84-88% among retirees. Unity's 89% in 2019 with a split opposition was a record since 2001. The Retiree Advocate normally gets slightly more than what they receive in citywide elections in the Retired Teacher Chapter election but not almost three times as high a percentage. If this is a preview for the next general UFT election, the opposition retiree vote should increase. This is why the opposition groups need to unite and not be divided as they were in 2019.

Retirees on Medicare potentially being forced to go from Medicare Part A and B (public plan) to Medicare Part C (privatized plan) is not sitting well with many UFT and other city worker retirees. Many don't want Mulgrewcare. This only became an issue toward the end of the campaign for chapter elections. Next year, in all likelihood it is going to be a major issue.

The Retiree Advocate intends to be heard as part of a city worker retiree rally and march in downtown Manhattan on June 30. 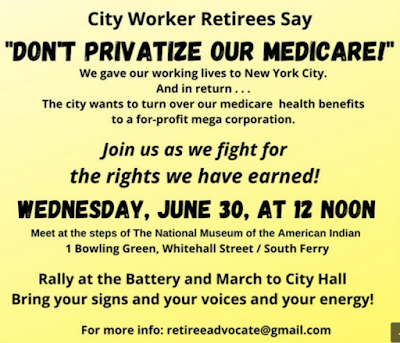 Norm Scott explains how the rally and healthcare privatization are related to the election:

Note how Mulgrew keeps harping on our (RA's) role in pushing back against privatizing that we are "politicizing" the issue. After all, who really cares about taking away our medicare? We just want to hassle Mulgrew.

With the whole world having moved away from privatized health care, Mulgrew acts like a Republican and moves us away from public health care. Sure it's politics -- the UFT's weak center Dem politics.

I’ll take the little bit of good news. Thanks James. Agree once Medicare is messed with, next year more retirees should be against unity. Stick to bread and butter issues and momentum can build with retirees.

James - we can't compare 2019, The better comparison is the RTC election in 2018 - I don't have the numbers but it was probably 20%. What is notable is the much greater turnout - 24k. In absolute numbers we probably more than doubled the 2018 vote. The retiree vote in the general election in 2019 has usually been 85%. We'll see next year if that holds or drifts in the direction of 70% which would be major. I'm going to guess ahead to next year - depending on whether there is one united front vs multiple caucuses. Head to head I'd bet Unity slips under 80% but don't see 70%.

Norm, Jonathan Halabi has the numbers for the general UFT elections since 2004. Opposition has gotten between 11% and 16% in general UFT elections with 11% being the latest in 2019, not 15%. This is the first election since then. That is a big change getting 30% now. I pointed out that opposition traditionally does better in the chapter election compared to the general election but this is still a breakthrough.

And still won by a landslide.

Medicare has not been privatized yet.