I sent these 25 bullet points to Diane Ravitch as a response to Arthur Goldstein's pro contract piece.

Update: Arthur is a decent guy and an excellent chapter leader. We just disagree politically on the contract.

This is everything you could want and more on why the contract should be voted down. 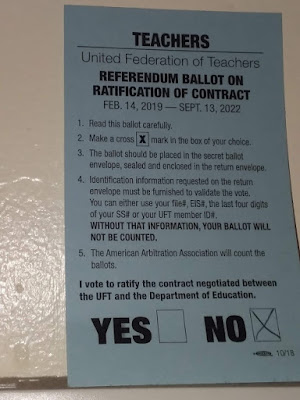 On October 11 the UFT and the City-Department of Education reached agreement on a new 43 month contract. The UFT’s Delegate Assembly sent it to the schools for ratification votes. Those of us in opposition have no way of countering the UFT’s huge spin machine but here are 25 reasons to oppose the proposed contract. If there is a fair debate, I am confident we would easily win and the contract would be voted down but don’t hold your breath waiting to see any of these criticisms in the union’s newspaper or the mainstream press.


This contract did not fall from the sky. It must be seen in the context of prior contracts. The givebacks from the infamous 2005 contract (the next five bullets) remain in 2019. *

-Teacher Development Facilitator
-Teacher Team Leader
-Master Teacher
-Model teacher
-Peer Collaborative Teacher
Put these 1,500 teachers in the classroom fulltime and we could actually lower class sizes a little.
·         How is it helpful at all for the UFT to set up a two-tiered pay structure? This seems antithetical to trade unionism. By agreeing to the Bronx Plan as well as the merit pay scheme described above, the UFT says it’s okay to pay more for certain schools and certain teachers. Here is how CUNY Professor David Bloomfield reacted on his Twitter page to the differentiation of teacher salaries.

David Bloomfield‏ @BloomfieldDavid Oct 11
Historic teacher contract line is crossed by @UFT on differential pay, allowing higher salaries for some teachers over others. What further differentials might be engineered? More for STEM teachers than humanities teachers, etc.?

·         PS Why is the UFT taking union dues when the city pays us back the huge interest free loan we gave to the city in the last contract that is being repaid in five installments in 2015, 2017, 2018, 2019 and 2020? Before the 2014 contract, the UFT never double dipped by taking dues twice. We paid dues on this money during the original pay periods.

*There is one exception on 2005 givebacks. The one concession that was taken out of the contract was having school for the final two weekdays before Labor Day for professional development. That has been changed. Getting those two days back in summer vacation cost us the guaranteed 8.25% interest on the fixed TDA that our supervisors and CUNY teachers still have. UFT members since 2009 get 7%. The city gained $2 billion from that deal so I would not exactly call it a takeback of the giveback.

There’s no rational way to argue what you’ve presented. You’ll be off Arthur’s Xmas list for sure.

Excellent summary of the situation. Thank you for writing this for us all.

Can someone explain what is bad about going on HIP? I looked and there are two HIP plans. Is it HIP Prime or HIP Prime POS? HIP Prime looks the same as GHI.

My wife worked in the health field and knew about all the different plans and said hip was the worst. That was a number of years ago so things may have changed. Some like it. But from what I remember the key was the lack of ability to choose doctors. And you had to go through a chain of sorts. Like if you need a specialist you needed to see primary first and so on.

James, Read 5 a. from the 6/28/18 MOA side letter from from Robert Lin to Harry Nispoli. What does self insurance for the HIP/HMO plan mean? Will the city try to force all future city employees onto HIP and self insure the plan to create a financial incentive to limit or deny coverage. BillP

Well this was concise. I share it with my colleagues. I hope an honest debate and discussion will happen. I doubt it, as we will likely be steamrolled and bamboozled at our chapter meeting to vote yes without a discussion.

Most people will probably toss the ballot in the trash and spend the rest of year complaining about the new contract.

When do we get the lump sum for per session?

Great article James but unfortunately way over the heads of NYC "Brightest".
They have already proven they dont understand simple math,let alone such lofty concepts as inflation and co pays. Got to hand it to Meathead Mike, he knows how dumb his members are.This will be voted up.

Is there another lump sum for teacher per session coming November 1st?

Psychologists keep getting screwed. A sprinkle of psychs with bite isn't enough. So so discouraging. Vited no as soon ballot was received. Thank you for sharing.

As someone who is 5 years in the DOE, I'm embarrassed to say that I don't know about a lot of these details. I'm an OT - so the teacher-specific details aren't my bag but I do wish that this was written for people who don't know the situation. And not for people who are already angry about the situation. The inflation point seems like it's being addressed. I realize the HIP is a loss. I do wish that OT's had more parity, yes or somewhere to grow.

UFT wrapped this contract real tight in the bag and pushed it down our throats. What do they care?