Independent Community of Educators founder Norm Scott and former Manhattan High School UFT District Representative Bruce Markens spent the better part of an hour explaining how the UFT became a top-down union that barely listens to its rank and file on Daniel Alicea and Leonie Haimson's Talk out of School program on WBAI. Anyone who wants to understand the history of how the UFT started to deteriorate in the 1980s and 90s into the union it has become should take an hour and listen to Norm and Bruce. 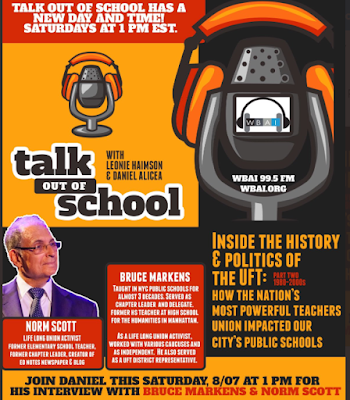 The show begins with Daniel playing a disturbing report from Florida on how pediatric intensive care units are filling up with delta variant COVID-19 patients. Daniel can't understand why NYC is not preparing a remote model for the fall. Children under 12 are ineligible for COVID vaccines.

This is followed by a riveting discussion about the history of the UFT. They start by talking about A Nation at Risk, the 1983 report commissioned by President Ronald Reagan that led to so much of what Norm calls Ed deform that included: merit pay, annual competency testing for veteran teachers, charter schools, high stakes testing, closing schools and eventually mayoral control. All of it was supported by then UFT and AFT President Albert Shanker while the UFT rank and file either opposed or was indifferent to A Nation at Risk.

Norm and Bruce then answer Daniel's questions about union democracy or lack thereof in the UFT.  They discuss how the ruling Unity Caucus lost the Academic High School Vice President's position in the 1985 election and so Unity challenged the election that they ran. They lost the subsequent election by a much larger margin so Michael Shulman from New Action became a Vice President. Unity later changed the rules so vice presidents are now elected at large so retirees in Florida who active people could never reach to campaign to get to elect vice presidents for high schools. Bruce then spoke about how he won the election for Manhattan High School District Representative three times in the 90s. In those days, chapter leaders in a district elected district reps. When Bruce retired in 2000 and another non-Unity Manhattan High School District Rep was elected, Unity changed the rules so now the UFT President appoints District Reps.

Bruce and Norm also recollected how the membership actually voted down the 1995 contract that had two years of 0% raises. Then-President Sandra Feldman allowed Markens to speak for as long as he needed at the DA since he was an opposition leader. (In 2014, UFT President Michael Mulgrew cut me off rather than allow me equal time.)

Please listen to the entire program as there is plenty more. It is worth an hour of your time.

Also in 1995 the contract was voted down because it sold out newer members. I think they wanted to pay them less or give them less benefits. The older, tier 1 members would not see us newbies out.

But the newbies don't care about veterans

@8:46 your post doesn't make any sense. How is James rewarding bad student behavior at all?