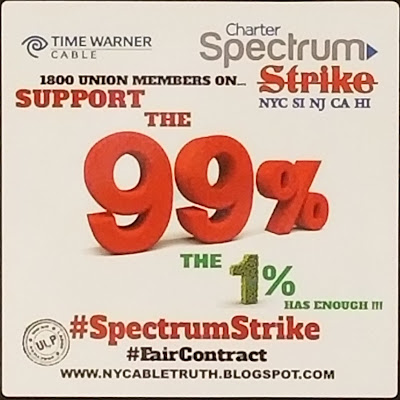 Our very friendly Charter/Spectrum salesman came to my house yesterday as have others on multiple occasions in the last year since Charter/Spectrum took over Time Warner Cable as the city's primary cable provider. My family has been with Verizon Fios since we moved to our current house in Floral Park, Queens in 2012 but we were longtime Time Warner customer when we lived in Flushing. My wife and I decided to take a look at what Spectrum was offering these days earlier in the year.

They have competitive rates and the first time they asked us to switch we said no only after we called up Verizon and they gave us back the promotional rate we had back in 2012 to stick with Fios. I know many of you have cut the cord and are going without cable and landline phone service these days but we are a little old school and like to have a zillion useless channels we rarely, if ever, watch and a home phone to go along with the smartphones.

Spectrum's prices are a little over what we have with Verizon but I certainly would enjoy having Spectrum's news channel NY1 back as it has been one of the best places to go on television for NYC news for decades. They covered the Jamaica High School saga very well.

A little while before the cable guy's most recent arrival at my door, someone came around and put a flyer in the mailboxes on the block that my wife picked up. I knew there was a labor strike at Spectrum but since I hadn't heard anything since late June and I am not a Spectrum customer, I figured it may have been settled and I just missed it, but no, there are 1,800 International Brotherhood of Electric Workers who remain on strike. I went to the SpectrumStrike2017.com website and so should everyone who reads this blog.

It is a long and ugly dispute that has been going on since March 28. I politely told the salesman to come back when the strike is settled.

No scabs will be installing anything in my house!

After nine years on the job, I joined my sisters and brothers of IBEW Local 3 in standing up and striking against Charter/Spectrum Cable over their continued disrespect of workers and the customers we serve. This decision was not made lightly.

For years, my coworkers and I have been targeted for punishment because we advocate for our customers. *Customers who deserve the services they were promised. We take great union pride in the work we do, but Charter/Spectrum is refusing to provide us the tools, resources and support we need to do our jobs properly.

In addition, the company has proposed drastic health care cuts for unionized workers and their families and wants to eliminate our pensions and job security. We decided we simply can no longer stay silent.

We can win. With your help we can show a Multi-Billion dollar company like Charter/Spectrum that labor and the community stand together! Here are the actions you can take now to support the fight:

1).  Sign the petition to pull Spectrum Cable’s franchise agreement with NYC. Tell them it’s time to show respect to workers and customers.

2).  File complaints against Spectrum Cable  with the Public Service Commission and the Attorney General of NYC.


I signed the petition.


What management is doing from the cabletruth blog:


To the Commissioners at the NYS PSC, below is some information regarding
Charter/Spectrum since the merger in May of 2016.


1-Where is the UFT on the strike? I don't remember passing anything at a Delegate Assembly in support of the union. I just reviewed the April, May and June DA posts. Did I miss it?

Comptroller Scott Stringer supported the workers and picketed with them. The Mayor called for a settlement in June on Charter/Spectrum's NY 1 Inside City Hall program. The Uniformed Firefighters Association and PBA Presidents have written letters in support of the union as have many local elected officials.

Here is the latest news story on the strike. IBEW Business Manager Christopher Erikson will be on Blue Collar Buzz (AM 970 radio) tonight at 9:00 pm to discuss the strike.

Workers want to keep their benefits and seniority rights. All of us should keep in mind the sacrifices working people must make in this day and age to have any hope of maintaining a decent lifestyle. I only wish teachers would mobilize like we used to while I was a student in the NYC public schools.We could gain our dignity back. As for these workers, you have our support here on this blog.

I forwarded some information to Executive Board friends to see if our Union will specifically support the IBEW unionized workers and inform our members about the strike. We could make a difference.
Posted by James Eterno at 7/30/2017 10:24:00 AM

Here's our problem: Bloggers write about ATRs and there are 50 comments and outrage. When other workers are losing their seniority, readers yawn. Look in the mirror on why we are so easily dumped on. Until working people come together, we are done.

It's terrible what is occurring in this country. There is a lot of mismanagement. There needs to also be better distribution of wealth. Workers need to be treated with dignity and provided with better benefits and conditions. Not everyone is wealthy or had the luck of being born wealthy.