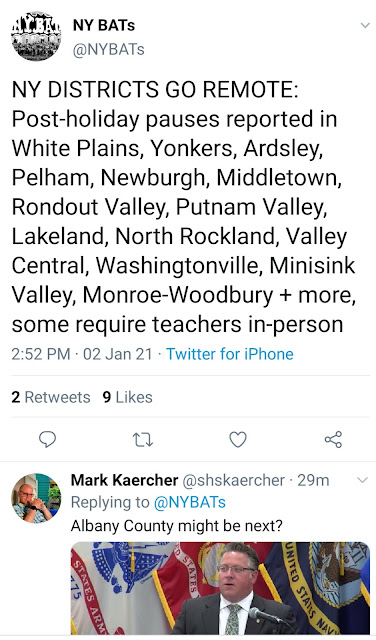 The NY Post reported on the London, England schools shutting down in person schooling:

British officials announced Friday that all schools serving younger children will shut for two weeks due to rising coronavirus infections and concerns over a new strain.

Education authorities had initially opted to reopen most primary schools after Christmas break while delaying class resumption for older kids.

But with COVID-19 rates surging and increasing worry over a more contagious new strain, critics protested the decision.

Officials were only going to shut a limited number of primary schools in certain parts of the country — including some but not all in London.

That position led to objections from some local school and municipal officials, and Friday’s reversal.

“The Government have finally seen sense and u-turned,” London Mayor Sadiq Khan posted in a tweet. “All primary schools across London will be treated the same. This is the right decision – and I want to thank education minister Nick Gibb for our constructive conversations over the past two days.”

There is growing pressure to close all in person schools in the UK from educator unions as the new strain of coronavirus spreads. This is from BBC:

The National Education Union (NEU), which is the UK's largest education union and has more than 450,000 members, said all primary and secondary schools should remain closed for a further two weeks after the school holiday.

It is advising members against working in school.

The National Association of Head Teachers (NAHT) called for all schools to move to home learning for a "brief and determined period for most children", and said it would issue guidance to head teachers recommending they take no action against staff who refused to return to work if they felt unsafe.

We have been urging UFTers to avoid working in school buildings if they don't feel it is safe. Worry about the job consequences later. Your lives are more important than your sick bank days.

Where are the UFT, NYSUT, AFT leaders? Have any of you heard anything from them?

UFT Solidarity has a petition to turn schools remote in NYC. What we really need is a collective spine.

Newburgh has been remote since november.

Kingston and Saugerties are fully remote.

NYC teachers might not be too brave but teachers elsewhere fight back.


Loyalists and citizens of the British Empire, Let's close the schools!

With HS and MS buildings closed, Mulgrew and de Blasio think they have sufficiently divided the staff to keep elementary schools open through even the largest COVID surge without pushback. Well, I would stand with my colleagues and pushback. Would you?

I stand to defend and support my fellow teachers.

The CDC says we are now at a "higher risk of transmission in schools."

Is anyone going to convince @NYCMayor to put schools on pause? @NYCHealthCommr?

My students need to be in school. They are some of the poorest in the city and being home is like torture for some. If you can’t be there for your students when they need you most, find another job. Doctors and nurses have to work through it!

Cuomo doing a good job wasting the vaccine. If you wanted to make sure that rapidly expiring vaccines distributed in 10-dose vials end up in the trash, this is how you'd do it.

Prioritization is important, but let’s follow Israelis to avoid waste:

9:05: I'm sure many of your students are poor, but for many in the city you have to take that with a grain of salt. To me poor is like my mother and father were as children. They went to bed hungry and to school with holes in their shoes. Just because people are collecting welfare and are on food lines doesn't necessarily mean they have no money. I find many people on the food line with nice cell phones and I see them loading the food into nice cars. Also, they said this holiday season, consumer spending was up. I still question how badly are economy was affected by this pandemic.

905, fuck you. All we do is babysit anyway. No education is occurring. Kill somebody else, not me.

SO MUCH FOR THE KANGEROO COURT!

Give me a break 9:05. We are teachers, not doctors. Our job is important but not life or death like a doctors. We also get paid way less and are treated like shit. Wake the fuck up. Good point 10:01.

Happy, dues payers? Getting what you pay for?

UFT not concerned about surging covid infections: “Our experience so far has been that the actual infection rate in schools has been very small, including in hard-hit neighborhoods, but we will be monitoring results closely as in-school testing begins again Monday."

10:01 I’ve seen many “poor” kids take a school lunch and walk straight to the trash can and dump it. I’ve seen it over and over and over again. My grandparents were dirt poor too. Same as you described. They were immigrants to America. Taught themselves to read in English with the help of their children who were speaking English in a NYC public school. Broke the cycle of poverty by making sure their kids did well in school and succeeded in their new land of opportunity. These kids in my school don’t know what poverty is. Gimme gimme gimme is all they know. If education is important in the home, rich or poor, you will learn and be successful. The buck stops at mom and dad’s home not at this teacher’s desk. Excuses are ruining generation after generation. Teachers’ lives matter 9:05.

SO MUCH FOR THE KANGEROO COURT!

https://nypost.com/2021/01/02/nyc-teachers-worry-about-school-safety-as-covid-19-cases-spike/
We will never close, time to stay homr.17% in Richmond hill!

Exactly at my school out of the 50 who attended daily, only about 2 ever took the lunch and who knows if they actually ate it.