This blog first reported on a Sue Edelman piece on low attendance for in-person schooling in NYC in October. Her report and information we received from teachers inspired us to write a post on how pigeons and squirrels were taking over the schools that families do not want their kids to attend in-person. We called for the best possible solution to be to improve remote learning but nobody listened.

Unfortunately, after five months, little has changed in the schools except for the name of the Chancellor. The pandemic is still with us and God willing we will be able to vaccinate our way out of it. The case numbers in NYC are still higher than when the system went temporarily full remote in November. 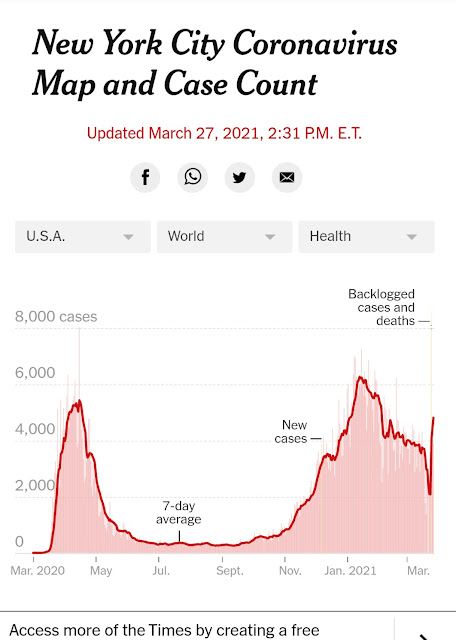 Fortunately for us, Sue is at it again with a front page piece cowritten by Melissa Klein exposing the Department of Education's in-person attendance figures which the DOE won't release to the public. 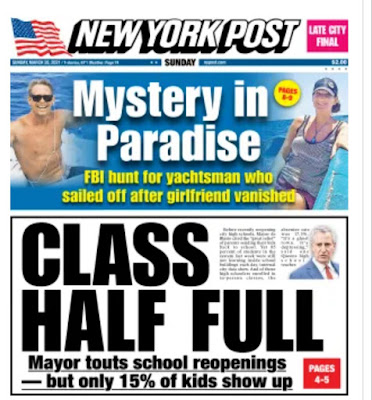 While Mayor de Blasio trumpets his school reopening as a major triumph, the number of students showing up in buildings each day still totals less than 15 percent of all kids in the system, attendance data obtained by The Post show.
Last week, 488 high schools joined elementary and middle schools now open for students in “blended learning” schedules, a mix of in-person and online classes.
But only 14,312 high-school kids came into buildings on Tuesday — 5 percent of the 282,000 enrolled. Another 3,040 who were supposed to be in school skipped classes that day — an absentee rate of 17.5 percent, according to internal Department of Education records.
Overall, daily attendance in 1,619 open schools hit a weekly high of 129,982 students on Tuesday. Another 12,309 were no-shows Tuesday, according to DOE data posted internally that evening.
What lies half-truths or other misinformation will the city come up with next to hide the reality that in-person learning is non-existent in many schools? In my humble opinion, what is keeping schools safer than they otherwise would be is the reality that parents don't feel they are safe and the vast majority won't send their kids into them. That may change with de Blasio's latest open enrollment but I wouldn't bet the house on that happening.
Another alarming statistic from the article is that total school enrollment in NYC is now down to under 900,000. We will keep an eye on that number.
Posted by James Eterno at 3/27/2021 07:55:00 PM

I loved the part about the school that had only 5 students enrolled had 100 percent attendance because all 5 students attended. Another school only had 4 students enrolled and only 2 attended making their attendance rate 50%. How come if I have 2 students taking the ELA Regents and they both pass, I don't get lauded for having 100% of my students pass the Regents.

That's because we have the gold standard in everything.

Indeed James that 900K is what I have been shouting from the rooftops about. We both know the City would rather excess than use the Federal money to lower class sizes with the same staff.

As for the attendance - it's in the 80's, which is about normal for HS. Overall more like 90 which is normal when you include the lower grades.

So then the question is why are so many staying home. I'm getting close to 100% but that's still in a couple classes only a handful and in the others 15 to 18. There could be many reasons including,
1. Parents who want their kids at home due to the virus (see also though #7)
2. Parents who want their kids at home for other reasons (childcare, safety, etc.)
3. (In HS) kid has a job and is making good money (relatively speaking) in the grocery store, Instacart, Doordash, etc. and/or the parent is locked out of work and is relying on the kid's income
4. Parent/kid does not want to deal with the stick up the nose once a week
5. Parent/kid does not want the kid wearing a mask all day
6. The kid's school is doing like Bayside and not actually doing any teaching, so the parent/kid says "why bother?"; or, the school only offered 1 or 2 days a week in-person and they said "why bother?"; also I encountered kids/parents with the misconception that instead of getting 1 or 2 days a week in-person they would get 5 remote, not the same 1 or 2 days of instruction.
7. Misconception that school would be dangerous or crowded, parent/kid was afraid to sign up in the fall and may sign up now
8. Kid begged parents who don't know better to go remote so he can pass without attending class or doing any work, instead plays video games all day and/or smokes & drinks and/or learns Biology with his girlfriend, hangs out at Jose Tejas and movie theater, etc.
9. Parent who only sends kid to school to collect SSI and/or avoid the scrutiny of ACS, who knows how to play the system, keeps the kid remote so he passes and earns a diploma without doing anything, i.e. beats the system for the child.
10. The small percentage (out of the 900k) of students coming to school are the ones actually interested in academic learning (or in lower grades, their parents are interested in their kids' academic learning). In other words, this is who would come to school if it wasn't compulsory (one of my too-out-there-for-most libertarian wishes like ending the Fed DOE). Many students say "school used to be lit" because the desks were together, the "workshop model" meant they spent half the period socializing, they could walk the halls, etc. Now that school resembles school again in the sense that the teacher teaches, the students are seated in rows and work mostly independently (I still do some group activities but it's much easier to tell now and control who's actually on task), there's no hall walking, etc. those "flotsam and jetsam" students have no interest in coming.

Kids are very smart. They know what in-person is and is not. My daughter's remote classes and my son's and my wife's are basically full each day. My kids and their friends are very interested in learning. It's simple. It would not be safe in buildings if everyone came back.

I'm a fully remote hs pe teacher. I get about 3% attendance. Oh well.

The NYC system is huge. There are probably schools where few log on. That said, people who contact me and aren't afraid to use their real name tell me a different story. Kids do log on and try.

I hate saying this, but in person is a waste of time in this climate. The kids I teach in person are only there bc their parents make them go in. They bring no energy to the table and the 45 minutes seem like a day and a half.

The remote classes I have fly by. Kids participate, crack jokes, ask questions and are more engaged.

Most students in high school love being at home, no camera, no accountability, on the phone or playing video games. Maybe not at bk tech, Stuyvesant, science, and many others, for the majority this is how it is at least for high school. Gotta love Sue and the NY post always going after truth on DOE.

There are still thousands of kids who live with grandparents or other elderly family members and I can see how it is an unnecessary risk to send them back to school at this point.

Here is the main point: DeBlasio actually does not give two shits if students show up to in person. What he really cares about is his ego. It's his classic, "MY SCHOOLS ARE OPEN WHEN OTHER BIG DISTRICTS ARE NOT". He also has a savior complex and he thinks opening up his schools makes him look like he is saving poor kids and families from themselves.

Everything is for appearances. NY stats are up. The Brazilian variant is killing younger people. The only reason the stats are low for schools here is because the sample size is microscopic and statistically insignificant. It’s like the UFT/AFT sample groups of two ( the ATRs Tweedle Dee and Tweedle Dum) that are dragged out of the basement when they want to prove something to the membership - ‘Most teachers feel safe in schools, Most teachers are happy with their union, Randi and Mike are incredible leaders! Teachers hate Bernie and Trump, and love Hillary!’ Most folks don’t have a working knowledge of statistics and it’s to all our detriment. If you have the time and inclination try to change that and question everything.

Think of how wonderful of an education economically disadvantage kids would have, if we took all the moralizing out of curriculum, emphasized STEM for kids who have the knack, helped the academically challenged learn an employable skill and banned kids who put in no effort and who routinely abuse peers and teachers. If those simple steps were taken, it wouldn’t matter if we had to lockdown on occasion. The kids who can succeed would succeed and we wouldn’t waste our best resources which are the good hearted children and the smart children. Instead what we do is pander to the god awful at the expense of these good hearted and smart children. Every adult with any say in how nyc schools are run should jump off the GW in an act of penance for ruining the lives of America’s best resource and America’s future. I’m serious. All these kids would be better off if none of these people woke up tomorrow morning.

In the printed version of the story there is a chart saying only 890,000 students are enrolled in the nyc doe. Wasn't it 1.1 million last year. That is a 19% reduction of students, but the doe said only 4% of students have left the doe. Am I missing something? I really wish the mayor and chancellor would speak to these numbers instead of touting this so called Gold Standard. Fool's Gold is more like it.

With all these half truths and misleading information on attendance statistics—seems like DeBlasio is taking lessons from Cuomo.

Totally agreed. All time and energy is spent on the kids who will make this world a shittier place. The good kids get left in the dust.

You probably didn’t go to NYC public schools recently. You actually understand math. The mayor is counting on the premise that we’re all mathematically challenged.

Try giving a cashier a few cents at a convenience store to round the change off so you don’t get any pennies. You’d think it was a calculus problem.

Here's an interesting read about summer school from The Hechinger Report:

@david...
The mayor is also counting on the premise that teachers will remain quiet and not speak up about the erroneous stats. That cashier is probably a beneficiary of the system called the DOE.