We have an update from Albany from the Buffalo News. We recommend reading the entire piece but here are some highlights:

ALBANY – The 2021 state budget, set for likely passage this week, will include a large tax increase on wealthy New Yorkers and some corporations, restoration of a planned annual phase-in of a middle class tax cut program and relief for homeowners and tenants affected by the economic downturn associated with the Covid-19 pandemic.

Planned tuition hikes at the State University of New York will be blocked for 3 years under the looming deal.

The final pieces of the budget, which was due by March 31, are still under negotiation, but officials are banking on legalization of mobile sports betting to be in it to help finance massive spending hike desires.

The state’s aid to public schools will rise by about $1.4 billion in the coming year under a tentative agreement between Gov.  Andrew M. Cuomo and the Legislature.

The governor’s proposal to use federal stimulus bailout money to supplant about $2 billion in expected state funding was rejected. Various education stakeholders raised widespread concerns about that plan because it would leave the state’s public school system facing a financial cliff when the federal aid money runs dry in a couple of years.

And the part you are all waiting for is at the end:

The final state budget will end up totaling more than $200 billion.

Lawmakers have three budget bills – out of a total of 10 – that were introduced over the weekend and can be passed on Monday. They previously passed one budget bill last week to authorize the state to continue to pay on its debt load.

Last to be seen – besides likely individual school district aid amounts from Albany – will be a massive bill into which, if tradition carries on again, all kinds of items will be sneaked at the very end.

Maybe that Early Retirement Incentive will be in that final bill which in Albany they call "The big ugly."

This is from Dan Clark: 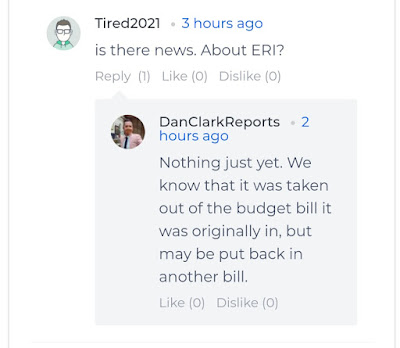 Any money for 2020 spring break? I mean Biden is a dem and James promised.

James didn't promise anything. With the probable increase in state funding, the city will have a difficult time crying poverty but the decline in enrollment is still a concern.

Decline in enrollment? LOL. Would you send your kids to a nyc school? Which ones are acceptable?
Erasmus?
Hillcrest?
Bushwick?
Tilden?

i guess the ERI is off the table?

I do send my kids to NYC schools.

Read the piece. The ERI could sneak into the final budget bill which is the mystery one.

Even with a waterfall flow of money from Schumer to New York - over 100 Billion - Genius Cuomo was bout 60 billion in the hole....our politicians are still trying to find ways to cry poverty, hold funds against schools, corrupt payments to their cronies...In our lives there is never harmony when it comes to money always corruption and poverty for us all....

No ERI, no spring break, Big time pay cuts coming (oh wait! Mulgrew will be proud of the fact that he negotiated pay freezes for us and our raises will be paid later fifty years from now).

That is how dysfunctional Albany functions 9:41.

Mulgrew was a trooper during the pandemic with his phone meetings providing safe secure information to us all when we were so concerned and scared that New York was broke. Now that we have Schumer sending us huge amounts of cash the pressure is off a bit but my hat is off to Mulgrew who inspired us to remain confident about our livelihoods and our families. Thanks Mike, you're President for a reason.

From a live blog on budget....


is there news. About ERI?

Nothing just yet. We know that it was taken out of the budget bill it was originally in, but may be put back in another bill.

James is a left wing hack like Randi. All talk. What schools do your kids go to? the ones with all the violence with 3% college ready rate? Which HS are you sending them to? Exactly.

Right on schedule, the mayor says he will END the two-case rule... but that the new rule that will replace it will be rolled out in...

I called 2 State Assemblymen including Education Chair Michael Benedetto from the Bronx last week. I spoke to representatives from their offices and they both gave me the impression that the ERI was NOT going to be in the state budget. They both stated that the money from the Feds may be the reason why. They also stated that it is unclear how many teachers will be needed next year. Ive been following this issue here and in the press and by making calls to State Senators and Assemblymen since November. Im obviously disappointed. At least James gave us SOME hope in this post today. Im keeping my fingers crossed.

I predict no eri. I don’t think the political environment is conducive. No leverage and No way to convince public that giving the employed teachers extra money to get teachers to leave when so many have lost jobs and businesses is something ny politicians will do. I just don’t see it happening.

@12:04 that update has been there for awhile

If he is extending opt in window, that means not enough students enrolled.

I posted on deBlasio's new changes. Please comment there and leave this space for the ERI-state budget.

Hillcrest is still a decent school. My sister went there and our experience has been very good. I mean, she was an honors kid though and was in one of the specialized CTE programs.

Lol. Hillcrest average sat score is 900 and has 50% college ready upon graduation.

Some breaking news during the call with Gov. Andrew Cuomo. He says there is a conceptual agreement on the state budget between his office and leaders from the state Legislature.

"We have a conceptual agreement on all issues, I think it's fair to say," Cuomo said.

That deal will include legislation to legalize online sports betting he said. The state is opting to contract directly with mobile sports vendors (or a single vendor) rather than doing it through casinos, Cuomo said.

"We'll contract with them, and we'll make the money. We don't need the casinos as a middleman," Cuomo said.


Remember that it's not a deal until the bills have been printed. They may have a "conceptual agreement," but that doesn't mean we have a budget deal on paper, chiseled into stone.

Lawmakers are expected to meet later today to review the agreement. Then, maybe we'll see some bills introduced tonight.

What school doesn't inflate their grades? Doesn't take away from the students that actually tried.