Last night was an evening reminiscent of the Blomberg-Klein-Walcott era as Mayor Bill de Blasio and Chancellor Carmen Farina's Panel for Educational Policy voted to close five schools. MORE sources tell me the PEP vote was not unanimous. Here is part of the Daily News account of the evening:

The schools are part of de Blasio’s controversial Renewal Schools program, which is aimed at improving troubled schools, but they have failed to make the grade, Education Department officials said.

The public was not happy with the decision but it's public be damned just like in the Bloomberg days. 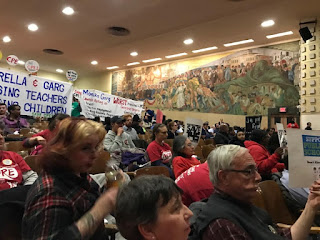 Junior High School 145 has put up a very noble fight to survive led by teacher Jim Donahue along with many other teachers and parents. 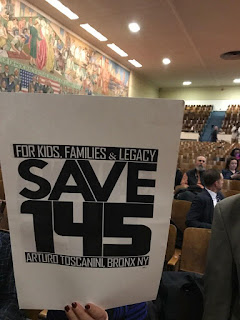 The UFT at the Delegate Assembly yesterday agreed to support JHS 145 but as usual President Michael Mulgrew stifled debate when I tried to raise an amendment. What was the amendment Mulgrew and David Pecararo from Unity would not allow me to make?

RESOLVED, that the UFT will continue to take a public stance against the closing of JHS 145.

and be it further RESOLVED, that the UFT will initiate or join in a lawsuit to save JHS 145.

Public Advocate Letitia James has already announced that the closing is illegal because it is a zoned school and the Community Education Council voted not to close it.

When President Mulgrew would not permit me to make my amendment, we engaged in our customary friendly dialogue with me telling him I wish he would learn how to run a debate like the Executive Board actually did Monday night (Mulgrew was not chairing) and Mulgrew responding that I was out of order and then me responding by telling him he is out of order every month. That was followed by Mulgrew wishing me a good day and me doing the same to him.

The beat goes on.

Our union leadership is absolutely pathetic.

The real purpose of theses closings is to keep the ATR pool well stocked with fresh bodies.

Disgusting is all I have to say. No outrage here like if some African American kid robbed a store. We are being robbed of our dues every two weeks.

Mulgrew is the Head Coward and will never cross his Tammany Hall bosses DiBlasio & Farina...he is the Resident Sell-out whose main job is to fatten the plate he & His underlings feed off of