If you want to see on display the differences between the two candidates for UFT President, read some of Michael Mulgrew's testimony in Albany concerning mayoral control of the NYC schools. The law giving the mayor a majority of the Board of Education in NYC sunsets in June and must be renewed by the State Legislature and Governor to continue.

This is from Mulgrew's testimony: 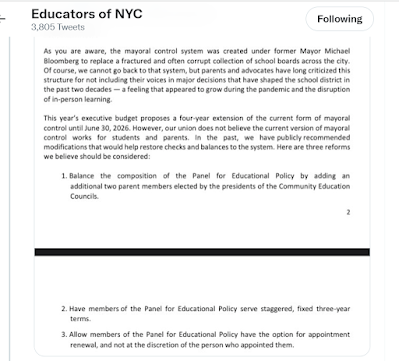 If this is the UFT's opening offer that would leave the mayor appointing a majority of the members of the Board of Education (Panel for Educational Policy), the UFT essentially wants to keep mayoral control.
Camille Eterno opposes it.
Last night she appeared with Abby and Matt on Grading the Drama, DOE Unplugged. Camille's part starts at the 22-minute mark but I recommend the entire show.
Camille clearly states that it's time to let mayoral control sunset. How about an elected school board like they just passed in Illinois for Chicago Public Schools?
Camille also strongly favors lobbying in Albany as a major priority for the repeal of what a UN labor agency has ruled is a human rights violating loss of two days' pay for every day on strike provision of the Taylor Law. You won't hear a sound from Mulgrew on this issue.

Hi I got an informal observation this week and it went horribly. It was during writing and we are all in the researching and also publishing phase— basically kids are in different parts and not much left for me to teach them. We had a whole issue where kids couldn’t get in with computers so principal comes in at the moment where we are shifting gears and some kids who were able to get logged on were sent to the small group table to work with me and the rest were to continue their research. Basically a bunch of kids up moving around asking me a bunch of questions, trying to get them set up with iPads for research— trying to tell the kids on computers where to go to start typing and of course the usual distracted students who are slow to get started or chatting off topic with friends.
The whole situation looked real bad and I am ashamed and embarrassed.
I tried to just keep my focus first on the small group and then address the other kids one off by circulating because they were already half set up with their notebooks a book and monitors were distributing iPads.
Anyways my question is has anyone ever had an obs like this? How did you go into the debrief?
I feel like I’m just going to break down. I’ve only ever had effecting observations and this was terrible in every way.
Also am I required to submit a lesson plan for this?

LOL. As if ufc or uft or untiy or anyone will change anything. Nothing but grade fraud and a waste of time, and I'm a new teacher.

Is it normal to feel so defeated as a first year? Is only January and I feel so done. Like no one see how hard it is? or How much you are trying to be the best teacher you can possibly be? I am a ENL teacher across three different buildings every single week. I teach K-12 in a D75 school. I have been evaluated twice and both times my overall has been developing. It felt like they are nit picking every time I get evaluated. How can I possibly effectively collaborate with over 20 classroom teachers, in three different buildings, my caseload is over 60 students, in all classroom ratios? I sleep every day around 12-1AM trying to make sure I am prepared as possible for the next day yet it feels like is never enough. I understand now why so many teachers after a while check out. The enthusiasm and drive you have for teaching is literally sucked right out of you.

Does Chicago or the state of Illinois have a Triborough Amendment like New York State?
Didn’t there used to be school board elections before 2000–or local school elections at one time—where some of the boards were filled with corruption—like District 32?

Local community school boards lost their power to hire superintendents in the 1996 law.

We are talking about an elected board for the entire city.

A Few Points: 1) Mayoral Control has to go. 2) Camille needs to have a debate with Mulgrew for all to watch and ask questions. 3) That lady Abby in the video is cute.

Interesting the he doesn't mention how members feel about it, only parents and students..

and really, that's it? minor changes to the PEP.

We need a union that speaks with its members, and takes votes on how to bargain and on what is wanted
Vote for United for Change.

3:58: I feel your pain. You are a good teacher because you are teaching students an important skill they will need for college. Unfortunately, APs don't like to see a lesson like that. They all want to see the same thing, students taking ownership of their own learning. They hate seeing students on different tasks which is unavoidable especially now with all the absences. You are always going to have students off task. A few suggestions: Always have a lesson. They can get you on poor planning if you don't have a lesson. When teaching writing, each lesson should be a skill such as how can we evaluate our own writing? or how can we writing an effective conclusion to our papers? Also, try grouping students based on how far they were in their paper and you could circulate from group to group. For students that were off task, you may need to give them an alternative assignment that is related to the skill you were teaching that day. To me your lesson was effective because you responded to the needs of the students. Still do what you are doing.

What you describe is more of everyday teaching and learning than the dog and pony show bullshit needed for Danielson. If your principal has a problem with real life everyday teaching they can go fuck themselves. Ask them to honestly think back to when they taught how most days went , did it look like a Danielson fairy tale all day, every day? Certainly not! But I’m sure they considered themselves good educators still. That’s the only point that needs to be made and beaten into their heads.

Get a teaching job on Long Island or out of state or leave the profession and do something else. Those are all good options.

Mulgrew has always favored mayoral control except when he fibs that he is against mayoral control. He just wants to have a seat (high chair) at the table.

Discuss what you tried to do, what went wrong, and how you'd handle it better next time. Everyone bombs occasionally. What did you learn?

You sounds like a great teacher who really wants students in your classroom to learn useful skills they can use in college and beyond. Always have a back up to anything that is related to technology. Have printouts ready to go just in case or allow students to use their cell phones. Make sure you put your back up plan in your lesson plan. AP's love to see how you plan to overcome challenges you may have during a lesson.

Please Remember that you should not expect all E or HE. It is the job of the AP to help you grow as an educator. If we were all HE and E there would be no need for AP's.

Also, be sure to use any feedback for improvement on all of your lessons after you have your meeting. AP's love see they have a + impact.

Refuse to let negative evaluations get you down and ruin your passion.

I love the idea of debate between Camille and Mulgrew. Can it happen???

There would have to be some type of debate, however, MULGREW THE DIPSHIT, will not go for that, which you can expose him on. You can also expose the fact there are no term limits and how is he able to continue on like a Pelosi who is 81 and is still wanting to do her inside stock trading and hold power.

I agree that the danielson can be weaponized especially against teachers veterans, but anyone.

If your wife doesnt extend hand to thousands affected by these mandates coerced or not shes losing valuable votes and will need every one if she has any chance to win. I hope you both go against Satanic Hochul, would be a nice change to see Lee Zeldin as Governor , we can use a republican here.

I also think your wife should start targeting the new contract that is expiring and what she believes we should be getting. With this disgrace of a skeleton we will need a minimum of 7% raises to keep up. I also think we the issue of parental leave, should be 12 weeks paid leave and if you have a spouse in the DOE you both should get the 6 weeks it should not be split. We do not split our yearly dues, that needs improvement.

Sounds like a normal day of teaching to me. Don’t sweat it. This is why unannounced observations shouldn’t happen.

I hate hearing of young teachers receiving poor observations. That can really impact psyche, morale and desire to strive to improve in this job.

Unpopular take: systems don’t matter of evaluation, but the person giving the evaluation matters. To the young person given the poor evaluation, don’t quit.

Research principals. Get on the open market and try to transfer. Use your instincts when meeting the admin.

Not to talk about myself, but I started my first five years with a principal who put people against one another. It sucked!

He then did me a favor and excessed me. I was an ATR for a while, did my time and got to see different things for myself.

Last year, I was assigned to a school with a good leadership team. Makes all the difference!

I was observed and felt it wasn’t a good observation. The admin disagreed. Gave me areas to improve, but they looked at the bright side.

In this job, the principal is the most important part.

When will teachers, supervisors, the UFT, the CSA, NYSUT, DOE, and NYSED come to the realization that the observation-evaluation process is, and has historically been, of no use?

Untrue, it has a purpose and a use. Bullying and harassment. I have been teaching for almost 30 years and my school can not wait to get rid of me. Neither can the annoying little turd holding the title of AP that observes me who is in his 7th year of teaching!!! Goodness forbid I do not have 5 assessments in a single 45 minute period that does not include a learning check at the end of the period. In my D 75 schools teachers should get all Highly Effectives if students and not killing each other all period. Thankfully I will be able to retire soon.
I do love my students.

50 years of wages that don't match inflation or production rates. the new bozo, same as the old bozo, and all the clowns before, have no effect on the system. they are all protectors and enforcers of it. we should all have a whole lot more than we do.